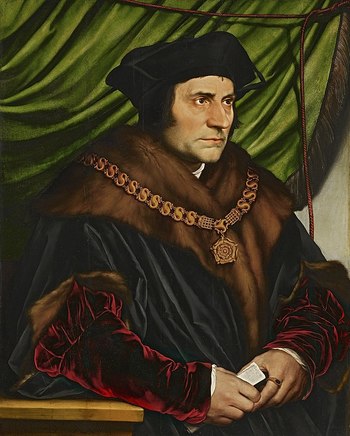 A portrait of the man for all seasons by Hans Holbein the Younger
Nursie: You almost were a boy, my little cherry pip.
Queen Elizabeth I: What?
Nursie: Yeah. Out you popped, out of your mummy's pumpkin and everybody shouted: "It's a boy, it's a boy!". And somebody said "but it hasn't got a winkle!". And then I said, "A boy without a winkle? God be praised, it is a miracle. A boy without a winkle!" And then Sir Thomas More pointed out that a boy without a winkle is a girl. And everyone was really disappointed.
Lord Melchett: Oh yes, well you see, he was a very perceptive man, Sir Thomas More.
— Blackadder II
Advertisement:

The year is 1530. Henry VIII and his good Queen Catherine are on the throne of England, with renowned scholar and lawyer Sir Thomas More as Lord Chancellor (the highest political office a non-royal could attain, somewhat like British Prime Minister). All of Europe's Catholic monarchs envy Henry VIII for having a Lord Chancellor with whom he can co-write blistering tracts condemning Martin Luther. Whatever could come between such good friends?

The beautiful and fertile Anne Boleyn, that's what.

More was a renowned writer and wit, whose Utopia was widely read and imitated — and still is to this day. He became Speaker of the House of Commons in 1523. He was also the first layman to become Lord Chancellor, after the fall of Cardinal Wolsey in 1529. Queen Catherine could not provide Henry with a male heir, and Henry saw this as a punishment from God for marrying her, as she had been his elder brother's widow. He wanted The Pope to annul the marriage for being invalid, but a previous Pope had already declared it valid (not to mention the fact that the troops of the Holy Roman Emperor — Catherine's nephew — had looted Rome very recently, and he was the last guy the Pope wanted to offend). So, Henry decided to break away from Rome, declare himself Head of the Church in England, and annul the marriage himself. This went against Sir Thomas' most cherished beliefs: he thought it was impossible for a human institution (the king and Parliament) to usurp the authority of an office established by God Himself (the Papacy). Sir Thomas chose to resign and live in poverty rather than have anything to do with the new changes.

Then came the Oath of Supremacy... an oath which everyone had to swear, recognizing the King as Supreme Head of the Church. Thomas used every legalistic ploy to get out of swearing the oath while still obeying his conscience, but when it came to the crunch, Sir Thomas chose to follow his conscience rather than his King, even though it meant imprisonment and execution.

The story of Sir Thomas More and his struggle with King Henry still has a lasting appeal, even for writers and audiences who have no particular interest in religion; Robert Bolt, who wrote the play A Man for All Seasons, was a non-Catholic and a Communist. This is because it is a story where a writer can explore issues such as political idealism, the conflict between the individual and the state, the primacy of conscience, and moral victory in death.

Not to mention that Sir Thomas wrote one of the most Troperiffic books of his century, Utopia.

He is generally seen as an upright politician in a country facing huge upheaval, with some very modern ideas regarding women's equality and education, and a talented satirist and philosopher. He was also canonized by the Catholic Church in 1935 and declared the patron saint of lawyers and politicians. On the other hand, some people see him as an example of religious intolerance, accusing him of using his position as Lord Chancellor to persecute the Protestants.