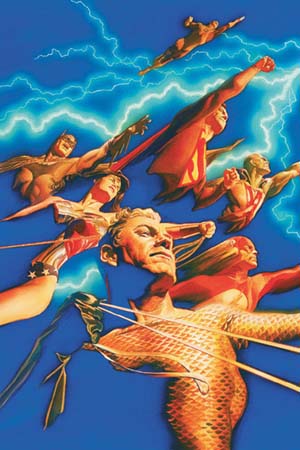 If you want a start date for the Modern Age, then the publication of Ultimate Spider-Man #1 in 2000 is as good a signpost as any: definitely a sharp turn back towards lighter and happier comics, harbinger of a lot of Modern Age tropes like Writing for the Trade (something of a side-effect of the Decompressed Comic) and habitual lateness, the beginning of Marvel's Ultimate universe, and hey — it's a great big obvious #1 issue. Of course 1996 is just as good, since it's the year that Kingdom Come came out, and the year that The Sandman (1989) ended, and the year of The Great Comics Crash of 1996. Or even 1995, when Astro City came out. Hindsight is always clearer, though, so this is another thing we'll probably have to change in five or ten years, when we can look at the Age as a whole.

Depending on your viewpoint, we may still be in The Dark Age of Comic Books; or at least, there's still some lingering elements of the Dark Age hanging around. This generally seems to refer to tone and atmosphere more than actual content, since the extremes of that era have long-faded, and could be more of a sarcastic insult as much as actual criticism. Some consider the extended "Dark Age" to be The Iron Age of Comic Books.

The Modern Age is the era in which Running the Asylum became overt, as creative teams often went to great lengths to restore the elements of their own favorite childhood comics — frequently to the point of completely discarding the contributions of the ''last'' creative team. With an unusually high rate of turnover in the 2000s, this would occasionally result in a character experiencing several All New Directions in the space of two or three years.

Before this point, superheroes had never been much of a thing in the larger popular culture, and their fans were often seen as nerds and geeks with really weird tastes (the comic book guy from The Simpsons is a good example). Superhero movies ranged from just mediocre at best to awful at worst, with the only exception of Batman, until Batman & Robin failed so badly it became a Genre-Killer for many years.note The Blade Trilogy was a success after it, but changed little for the genre because for the casual movie watcher it was Vampire Fiction and the usual superhero tropes were largely absent; so most would be unaware that Blade was a comic book character to begin with. All this changed as well at the turn of the century, with the X-Men Film Series, the Spider-Man Trilogy, The Dark Knight Trilogy and the Marvel Cinematic Universe, which delivered blockbusters on a frequent basis. The idea of the superhero became more acceptable for the public, and many obscure characters like Iron Man became household names overnight. Of course, this revolution influenced the comic book themselves, who took great lengths to imitate the look and feel of the films.

Another feature of the era is while the decline of the comic book as a regularly published periodical is real, the rise of the graphic novel as respectable reading material in mainstream North American culture has been dramatic. For instance, public libraries, which for generations had largely treated comic books like a hospital does with medical waste, have embraced the format in their acquisitions.

Non-superhero comics are becoming more mainstream, with books like Logicomix (which is about Bertrand Russel and the foundations of math) and Pride of Baghdad (which is about some lions who escape from the zoo during the Iraq War.) This trend is partly thanks to the influence of Japanese and European pop culture, which have always held the position that there can be as much variety in comic books as there is in any other medium. For independent creators, there are now online publishing alternatives like Patreon.com, which enables subscription arrangements to patrons to allow for new comics to be funded.

Some suggested that, following the "metallic" scheme of Golden/Silver/Bronze/Iron, the current age may be known as "Aluminum", since so much of it is recycled. Another possible name is the "Diamond Age" or Prismatic Age

because the medium has become multifaceted (or because Diamond has an effective monopoly on distribution, take your pick). Another suggested name is "The Post-Modern Age", due to the growing number of post-modern books that have been coming out. The name "Neo-Silver Age" has also been used, considering the common values of the two. Grant Morrison recently referred to the current age as the "Renaissance", to contrast it with the Dark Age that had just come before. Some consider this and the Dark Age to be a single era, The Iron Age of Comic Books.

Like the previous "Ages", the end of this age and the start of a new one would require a clear shift in the comic book industry, but such changes had always been gradual and may not be recognized right away, not unless we were already in the middle of the new age. Several turning points have been proposed, both in storylines (such as Flashpoint in DC and Secret Wars (2015) in Marvel) and in editorial events (such as the final end of The Comics Code), but didn't generate great changes in the comic book industry as a whole.

With the rise of indie comics, creator-owned publishers like Image Comics (The Walking Dead, Saga) and their heavy influence on mainstream titles at the Big Two like some of the examples above, not to mention an increased emphasis on diversity and broadening demographics (e.g. Ms. Marvel, a book with a teenage Pakistani-American heroine which saw seven printings of its #1 issue and boasts incredible digital sales), it's very possible that 2014 —in general— was the official beginning for a new comic book age.

The physical comic book medium seemingly underwent perhaps its most existential crisis with the COVID-19 pandemic in 2020. In an even more severe version of the theatrical film medium's business situation of being paralyzed by the mass temporary closure of the theatrical chains, Diamond Distributing, the major comic distributing business in North America, announced that it would accept no more material from publishers starting April 1 until further notice. Given that Diamond had a virtual monopoly supplying comic book stores since the 1990s since Marvel Comics' botched attempt to bring distribution in-house, it was thought it could devastate the business viability of the North America comic book medium depending on how long the situation lasts and if things can return to normal in time. However, outside the general book retail sector, that could leave digital publishing, either through commercial sites like Amazon.com's Comixology for the commercial publishers or crowd-funding sites like Patreon for independent creators, as the future of the art.

Eventually, Diamond resumed operations and comics began returning to circulation a few months later, but the damage was already done. Diamond's handling of the crisis was heavily criticized, and comic book publishers saw the writing on the wall that Diamond's monopoly was no longer sustainable.note Even before the pandemic hit, it was widely known inside the industry Diamond was unwilling to adapt to the modern era. As recently as 2019

, some of Diamond's customer service operations used Windows 95 as their OS, an OS that hadn't been supported for over 17 years. Within the course of nearly a year, Diamond lost two-thirds of its business when DC and Marvel ended their contracts with them and shifted distribution to Indiana-based Lunar Distribution and Penguin Random House, respectivelynote While Diamond will still distribute Marvel material, they'll do so as a wholesaler on behalf of PRH. The latter deal has been seen as far more consequential, as Penguin Random House is a worldwide leader in book publishingnote How big? They control 24% of the North American publishing market as of December 2020, more than any other book publisher; HarperCollins trails it by 11% and therefore could conceivably sell comic books to other retailers beyond comic book stores, including grocery stores and retail chains. While this has led to concerns about the future of comic book retailers as a whole, it could also lead to comic books being more widely available than they've ever been, which could push other comic book publishers to venture beyond Diamond as well.

Series of the Modern Age which may or may not be notable in the future: