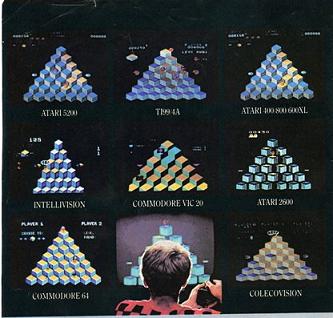 Four consoles. Four computers. All with the same game. In retrospect... whoops.
"The enormous let-down of such a hugely anticipated game as E.T. merely caused the scales to fall from the eyes of the buying public. 'Hey, all these overpriced bleepy games with pixels the size of post-it notes are actually kind of shit!' Yes, seems obvious to us, but cut them some slack: it was the 80s. They still thought Bananarama was good."
— Zero Punctuation on E.T. the Extra-Terrestrial for Atari

In the early 1980s, the American video game industry entered its second generation and was making money hand over fist. Arcades popped up across the country, the Atari 2600 dominated competitors in the home market, and Pac-Man Fever (no relation to the same-named trope) held America in its iron grip.

But in 1983, something went terribly wrong. Dozens of game manufacturers and console producers went out of business. Production of new games stalled out. The American console market as a whole dried up for two years — and when it returned, Japanese companies dominated as old American stalwarts tried to play catch-up.

So, what happened? The story of the Great Video Game Crash of 1983 truly begins with the downfall of Atari, a company forever linked to the Crash:

With its customer base eroded by inferior technology and their profits consumed by wildly optimistic production runs, Atari racked up nearly half a billion dollars worth of losses by the end of 1983. Of course, if it had just been Atari suffering, there wouldn't have been a real crash, but its competitors were also facing hard times:

When the market returned to prominence in 1985, it largely rode on the success of the Nintendo Entertainment System, at which point the console's native Japan overtook America as a leader in the video game industry, which meant the Crash never came close to killing video games as a medium (think of the Crash as a condensed version of the type of American business hubris that led to the financial meltdowns of 1929 and 2008).

The home gaming market suffered a huge blow from the temporary death of the dedicated console, but the growing PC base (especially the Commodore 64) provided a viable replacement for game production by the small number of companies left alive. While the American arcade scene began its slow descent into obscurity, arcade games still stood near the height of their popularity. Minor arcade classics like Paperboy, Punch-Out!!, Space Ace, Karate Champ, and Gauntlet saw release during this period — and many of them would end up ported to home consoles (with varying degrees of success) after that market's revival.

Outside North America, though, the Crash made little impact. In Europe, 8-bit home microcomputers (predominantly the Sinclair ZX Spectrum and the C64) already dominated the gaming market. An outrageous number of one-person coders wrote and released games for the far cheaper tape-distribution system, which helped those machines flourish and become the backbone of Europe's gaming industry for the next decade (this is also why the NES and Master System took a lot longer to catch on in the UK than they might have). These "bedroom coders" received status labels ranging from "cult hero" (Jeff Minter, Matthew Smith et al) to "legend" (Bell and Braben, the Oliver Twins) from their fans - but that didn't prevent a number of talented developers from making enough stupid decisions to snatch defeat from the jaws of victory (Imagine Software; see here

for info, with a big example of an Orwellian Editor as a bonus). Even with the missteps, the European gaming industry remained solid. (Nevertheless, a similar crash due to market saturation affected the home computer hardware market in the UK in 1984, causing a lot of the less popular machines like the Dragon 32 and Jupiter Ace to disappear entirely and causing Sinclair and Acorn to be taken over by Amstrad and Olivetti respectively.)

The Crash had little discernible effect on the Japanese market, either. Though the home of a massive arcade base that grew out of Pachinko parlors and Mahjong dens, Japan didn't adopt home gaming consoles at first: people deemed American imports as curiosities at best. The massive discounts at which Japan forced people to sell computer technology after the Crash provided the perfect storm for domestic development - and the release of the Famicom console, the MSX computer, and the SG-1000 in 1983 didn't hurt, either. The Famicom and MSX dominated the Japanese gaming industry for the rest of the decade, though the latter would soon fall to increased PC competition. (Near the start of 1983, Atari had entered into the early stages of negotiating rights for the Famicom's US release. The Crash eventually ended those plans, and it later came out that Atari never had the capital to buy the Famicom for the US. They were just hoping to tie up Nintendo with red tape for as long as possible.)

Latin America is an interesting case regarding the Crash: In that region, the situation was a mix between the European case (barely affected) and the Japanese one, for a myriad of reasons. While barely documented, Atari and many other American developers also dumped their unsold stock in that region, mainly to Mexico. Since there was no videogame magazines in that era in Latin America, nor internet, most of the publicity those games received were mostly from mouth-to-mouth and even with this early Latin American gamers were basically disconnected from what happened with the video game industry around the world, so they didn't know many of the games they were playing were basically unpopular unsold stuff from other countries. This wasn't exactly a bad thing, since, even with the Crash happening in the States, that didn't prevent Atari consoles from being very popular in Mexico and many other Latin American countries until the NES came out, and even with this, that console didn't catch out until the end of the 80s. This also had the side-effect of many Atari games and consoles were still sold and available there until the 2000s, when most of them started to break, but even to this day, you can still buy Atari games for cheap in flea markets, garage sales or the internet. On the other hand, this doesn't apply with other consoles from the same era, with the sole exceptions of the Intellivision and Colecovision, and even in that time, those were considered luxury consoles for the rich, as their asking prices were too high for many people in the region. The effect of the Crash in PC gaming was basically null there, because personal computers were considered as a luxury item out of reach for many Latin Americans, and only big companies and very rich people could afford them.note Not even Commodore with the Commodore 64 was able to make a dent in Latin America, and let's not talk about the Amiga, which was almost unreachable for many there. Atari, on the other hand, only exported the Atari ST there, and was just until the earlier 90s, almost six years after its American debut.

Nintendo exported the Famicom two years later as the "Nintendo Entertainment System" and achieved near-monopoly status because of the American console market's weakened state. Nintendo's "Seal of Quality" system and a cartridge design that no one could manufacture without Nintendo's approval provided a degree of protection against the aforementioned low-quality shovelware that plagued the Atari. To assuage concerns of American shopkeepers burned by the Crash, Nintendo designed the NES with a front-loading cartridge slot to make it look more like a VCR and bundled its largest NES set with the Robotic Operating Buddy (R.O.B.) and Zapper light gun peripherals (which looked much more like conventional toys). The former only worked with two games, and the latter didn't fare much better in the long run, but they both looked cool for the time, which was more important.

Toy stores saw through the plan, but success in test markets and a brilliant advertising strategy landed the NES space on store shelves across the country. Nintendo also had the perfect game to bundle with the NES for its 1985 American debut: a fat Italian plumber, best known for antagonizing a giant ape, ventures across a land overrun by turtles and walking mushrooms in order to save a princess from the grasp of a dragon-turtle villain.

The crazy idea proved Crazy Enough to Work - and it ushered in a new era of gaming as a result.