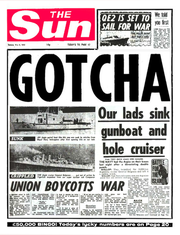 Bullseye
"The Empire Strikes Back"
— Newsweek headline (19 April 1982), after declaration of war.
Advertisement:

The 1982 war between Argentina and the UK over a bunch of British-owned islands in the South Atlantic.

On April, the Argentine military junta launched an invasion of the islands it called the Malvinas, thinking that the British military wouldn't be able to respond effectively. Margaret Thatcher dispatched a Royal Navy task force, which arrived in May.

Diplomatic efforts failed, as neither side was willing to back down. It's also possible that war was what both sides truly wanted, since it actually helped both sides politically-speaking. The newest junta and Margaret Thatcher needed to regain their popularity, and fighting a war helps to boost a leader's popularity (assuming they win, that is).note Many believe this requirement for a good image was the true reason behind the war. For the Argentine junta, this naturally failed spectacularly with their defeat, and they were toppled the next year.note It's been noted that if the junta had been willing to wait another year before invading, they likely would've won. There had been massive budget cuts scheduled for the British military in 1982 (cuts which were cancelled because of the war) which would've resulted in significant downsizing of the Royal Navy. Including the scrapping of the old aircraft carrier HMS Hermes and the sale of the brand-new HMS Invincible to Australia. Without a meaningful ability to bring air cover with them, Britain would've had little choice but to surrender the Falklands.

The British Task Force retook the islands after an intense land, sea and air battle, which introduced the world to Exocet anti-shipping missiles and saw the Harrier dominate against Argentine Skyhawks. Fast-Roping also made its debut here.

Resulted in 255 British and 649 Argentine deaths, as well as those of three civilians. The British lost several ships totaling to six ships and one landing craft, including two Type 42 Destroyers, while Argentina lost 9 ships total, including a trawler. The British also lost 11 airplanes and 24 helicopters (totaling to 35) while Argentina lost 75 airplanes and 25 helicopters (totaling to 100). (Keep in mind that the British had at the time modern weaponry, training and material while Argentina used outdated equipment, sent untrained, barely legal and inexperienced conscripts, many still in school, instead of its actually dangerous regulars and used ordnance that sometimes didn't even work.) The most notable Argentine loss was of the cruiser ARA General Belgrano (which had previously survived the attack on Pearl Harbornote ARA General Belgrano was built as the American Brooklyn-class light cruiser USS Phoenix. She was the largest US warship to escape Pearl Harbor during the attack, and served admirably throughout the war, only to be declared surplus in 1946 by a US Navy that had enough ships afloat to make a large artificial continent, but no war to fight with them. Faced with the expensive proposition of scrapping the retired cruiser, the US government sold her to Argentina for a song in 1957.) outside the pre-arranged war-zone to the British nuclear submarine HMS Conqueror. The Argentine Navy played little part in the war after that. In the wake of the conflict, Argentine author Jorge Luis Borges described it as "a fight between two bald men over a comb."

Notable for being the last armed-conflict in which the United States of America officially declared neutrality, though that neutrality wasn't exactly "neutral" per se. Having been recently gutted by budget cuts, some of the Royal Navy brass were unsure about just how much force they could project into the South Atlantic. Though it turns out that they were able to handle things just fine by themselves, the concern was significant enough for Thatcher to obtain an unofficial agreement with the Reagan Administration that would have Fleet Air Arm Harriers operating from a US Navy aircraft carrier (the United States wouldn't be involved in hostilities, just making sure the British jets didn't get lost...or run out of ammo) in the event that a British carrier couldn't be made ready in time. The agreement was rendered unnecessary when HMS Invincible commenced flight operations in the Falklands Theater. There is also a rarely-quoted and even-more-rarely-believed conspiracy theory claiming that ARA General Belgrano was secretly sunk by the Americans. The theory alleges that only the Americans would've known how to sink a Brooklyn-class cruiser so quickly—because seriously, who would've known that blowing her bottom out with a bunch of torpedoes would work so well?

Incidentally, the Falklands conflict was technically a rematch between Britain and Argentina. Britain invaded Argentina

during The Napoleonic Wars when Argentina was still a Spanish colony, part of the Viceroyalty of the Rio de la Plata

, and Spain was allied to France. The invasion was an embarrassing defeat for Britain, particularly since the Spanish colonists (led by the French expatriate Santiago de Liniers

) fought it off by themselves without any help from Spain. The colonists' irritation at the lack of Spanish aid was one of the reasons for their later revolution.

The Falklands War in fiction:

Michael Heseltine and Margaret Thatcher have a coded discussion about the Falklands War.

Michael Heseltine and Margaret Thatcher have a coded discussion about the Falklands War.