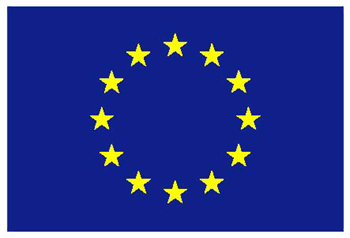 The flag of the European Union - and the separate, larger, Council of Europe
"Why should there not be a European group which could give a sense of enlarged patriotism and common citizenship to the distracted peoples of this turbulent and mighty continent? And why should it not take its rightful place with other great groupings and help to shape the onward destinies of men?"
—Winston Churchill
Advertisement:

The EU. Apologies for the Acronym Confusion; this page is not about the Expanded Universe EU, it's about the European Union EU.

Entire books have been written on the European Union, the common thread in all of them being dispute on what it actually is and is becoming. So this will be a brief summary.

After the Second World War, the countries of Western Europe (Central and Eastern Europe were too busy becoming Commie Land) decided that to prevent another war, they would need to ensure common control of the vital industries (coal and steel) needed to fight a war and that Europe should be unified. In 1951, the European Coal and Steel Community was formed. One thing led to another, and in 1957, the European Community was formed with six members, or so the official story goes.

The EEC has changed considerably since then. It's undergone two changes in name and several enlargements of membership, as well as one contraction.

Today the EU has 27 members:

The United Kingdom was also a member of the EEC/EU from 1973 to 2020. It joined in the first round of expansions beyond the original six, and was the first (and to date the only) member state to leave.

Croatia is the most recent state to join. A number of other countries are interested in joining, most notably Turkey. Others include Serbia, Albania, Montenegro, North Macedonia, Bosnia and Herzegovina, Kosovo, Moldova, Georgia and Ukraine.

There are also certain nations who have a detached relationship with the EU. Switzerland has a unique deal with the EU which the EU regrets allowing them to have.note And if this referendum

is anything to go by, the Swiss may also be sick of being part of the deal. It is completely surrounded by the EU though, but its historic neutrality leads it to want to stay out. Norway is also not a member, but like Switzerland it is in EEA (European Economic Area) and EFTA (European Free Trade Area) note it has twice been invited to join, once in 1972 and again in 1994, but declined after the populace narrowly voted against doing so. The upshot of this is that these two countries have to implement EU regulations (mostly on product standards and trade), but don't have any say in how the regulations are made; in exchange for this, they enjoy a privileged access to the EU free trade zone, which considerably boosts their economy and comes with various other cooperation programs.

Scotland wanted to have this status if it decided to formally become a separate country from the rest of the UK in 2014, but the EU wasn't very positive about them automatically having said status, and it became a moot point since the Scottish independence referendum ended with a narrow victory for the "No" camp ... until the UK itself voted to leave in the EU referendum a couple years later, and eventually left. As a result, were it to ever become an independent country, Scotland would have to (re-)join the EU from outside.

The EU today is essentially a free trade and movement area (with a lot of common standards, including electricity at 230 V plus or minus 10%, although this isn't really a variation from previous standards used and old toasters still work), but also covers a considerable number of other areas, such as social policy, the environment and increasingly foreign affairs. The mantra is "free movement of people, goods, capital and services". You can emigrate and work freely within the Union (as well as vote in local and European elections wherever you live) — between certain countries, you don't even need a national ID. This group of countries are the "Schengen Countries" you might see referred to in airports — although it's worth noting that this is not specifically an EU thing, and some countries, notably Norway, Iceland and Switzerland, are in the Schengen area but not the EU; and vice-versa, the Republic of Ireland is not.note Ireland wants to be in it, but to do so would mean that the British would either have to join - which they'll never do

— or create a physical border — which neither nation wants to do.

The EU's institutional structure is pretty complex, but its main bodies are the European Commission (nominated by the national governments and confirmed by the European Parliament, they draw up the policy and initiate legislation), the European Council (who are the heads of government of the 27 member states; they negotiate treaties and set broad goals), the Council of Ministers (made up of the ministers from each member state, they meet in policy-related groups, and are responsible for examining and making decisions on Commission proposals), the elected European Parliament (who pass, amend or reject proposed legislation along with the Council of Ministers, and do investigations) and the European Court of Justice (who can strike down national laws contrary to EU treaties and law). Which institutions take priority in decision making depends on the policy area, for example, in competition policy the Commission is influential, whereas in foreign policy the member states are the main actors. There was somewhat of a problem with working out who precisely is in charge, as Henry Kissinger (he's still alive, surprisingly) once commented.

The EU is currently trying to work out where to go next. Attempts to write a new constitution for the EU were categorically rejected by French and Dutch referenda, and the Treaty of Lisbon (said to be very similar to the constitution) was rejected by the Irish in 2008; they un-rejected it in September 2009. Note that there was no agreed-upon way for a member state to leave the EU prior to the Treaty of Lisbon, which codified the withdrawal process in Article 50 of that treaty. Ironically, the first (and so far only) country to invoke Article 50, the United Kingdom, almost certainly would have voted that treaty down in a referendum, which had been a manifesto commitment by Tony Blair's Labour government in the 2005 general election. Had Blair (and his successor Gordon Brown) not reneged on that commitment, the subsequent (and successful) referendum to leave the EU might not have even been legally possible, let alone seen a different result.

The green light meant a restructuring of EU governance, leading to the creation of two additional top jobs, increasing the count to three:

It should be noted that many aspects of a united Europe actually have little or nothing to do with the European Union itself. There are several dozen organizations and treaties that unite European countries in some way or another. While many of these are connected to the EU, like the European currency, the free trade area, Schengen area and customs union, some like the European Space Agency or Eurovision and UEFA are not affiliated with the EU at all. They all have different sets of members and keep expanding and changing all the time, so it can be hard to keep track of who is part of what at any given moment. The main force which holds the confederation tight together is the reliance on an European budget which can provide funding for what is needed in member states' large-scale projects, according to a very complex and convoluted regulation system.

A lot of the symbols commonly associated with the EU actually belong to different groups. The Flag with the circle of stars on a blue background for example originally belonged to the (larger) Council of Europe. The press, especially in Britain, is crap at telling them apart, and either simply calls them all "Europe", as though Britain isn't an important member of them, or, if the paper is anti-EU, usually simply blame the EU for unpopular decisions, even if it is only tangentially relevant or not involved at all.

In 2010 Russia decided to start its own trade union in the form of the Customs Union, hoping to rival the EU. It began with just Russia, Belarus and Kazakhstan as members, but started to raise the EU's ire after luring Armenia to join it in 2013 when the country would otherwise have had a free-trade deal with the EU (apparently it's incredibly difficult, but maybe not impossible, to have ties with both trade unions). Attempts to draw Ukraine into this union seem to have rather decisively died after their pro-Russian president was overthrown in a revolution and Russia responded by annexing the Ukrainian province of Crimea.

Stories set in the near future often contain a more unified EU.