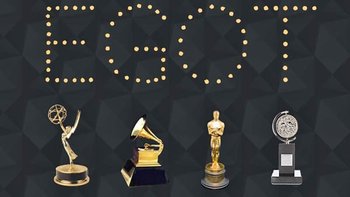 The Grand Slam of American Show Business
Chrissy Teigen: [John Legend]'s probably at home, polishing his EGOT.
Zach Galifianakis: ...Is that what he calls his penis?
— Between Two Ferns: The Movie
Advertisement:

In the United States, the four most important entertainment awards are the Emmy Awards for television,note There are two Emmy Awards, handed out by two separate organizations: the Primetime Emmys are handed out by the Academy of Television Arts and Sciences (ATAS); and the Daytime Emmys are handed out by the National Academy of Television Arts and Sciences (NATAS). Yes, really. The two organizations were formerly united but separated in The '70s. It is generally agreed that winning either the Primetime or the Daytime Emmy "counts" for the purposes of the EGOT although the vast majority of the Emmy winners won Primetime Emmys; one of the three exceptions, Whoopi Goldberg, memorably defended her inclusion among the EGOT winners in an episode of 30 Rock the Grammy Awards for music, the Academy Awards or Oscars for film, and the Tony Awards for theater. People and franchises that have won at least one competitive (non-honorary) award at all 4 ceremonies are called EGOTs. The term was coined by actor Philip Michael Thomas in The '80s, at the height of his celebrity. He has yet to even be nominated for any of these four awards. Lynn Redgrave is the only person in history to be nominated for all four awards and never win any of them.

As there are four distinct awards, completing the EGOT is also called a "grand slam". On a historiographical note: many older lists of EGOT winners will credit Helen Hayes as the first EGOT recipient, as her 1977 grand slam was recent and high-profile enough to be remembered in The '80s, when the term first became popular. It was subsequently discovered (long after his death) that Richard Rodgers was the first to complete an EGOT, long before anybody knew or cared what that was.

If a performer has won an Oscar, an Emmy, and a Tony, all in the field of acting, they are said to have won the Triple Crown of Acting. There have been 24 Triple Crown winners to date, making them about twice as common as EGOT winners. Since we have a category of near-misses (3 out of 4 category winners) below, we will also note all Triple Crown winners.

The year in parentheses is when the grand slam was completed; the first time each recipient won their fourth award.

3 out of 4 competitive awards (near-misses):

For extra fun, * marks creators who have been nominated for the missing award.