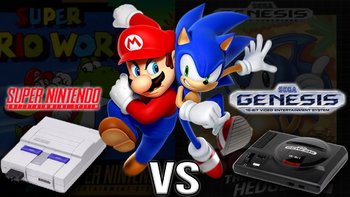 Whose side were you on in The '90s?
(Image is from the video thumbnail of "Super Nintendo vs Sega Genesis - The Original Console War"

The 16-bit era, or Fourth Generation, kicked off with the release of the NEC/Hudson Soft console TurboGrafx-16 (or in Japan, the PC Engine) in 1987. Emerging as an unexpected viable competitor to Nintendo, the PC Engine/TurboGrafx ended up being the first system to outsell the Famicom in Japan, maintaining strong levels of success there and spurring Nintendo into action. With this new era came hardware more powerful than their 8-bit counterparts, able to handle more colorful and detailed graphics and more complex games.

However, the first 16-bit system to truly gain momentum worldwide was the Sega Mega Drive (Sega Genesis in North America). As it was feasible to make 16-bit console hardware based off their Sega System-16 arcade hardware, Sega released this console in order to compete with the aging 8-bit Nintendo Entertainment System. The Mega Drive did only fairly well at first with games like Altered Beast, but then it really took off with Sega's Breakthrough Hit, Sonic the Hedgehog. Nintendo saw its almost monopolistic dominance erode with the competition's more advanced hardware, and they responded with the Super Nintendo Entertainment System to fight NEC at home and Sega abroad. Meanwhile, Nintendo would maintain their iron-fisted licensing policy of the previous generation, imposing a two-year exclusivity clause on developers that made games for their consoles that forbade them from creating ports for competing platformsnote A two-year gap might not sound like very much to a modern reader, but it is worth remembering that gaming technology was evolving extremely rapidly at the time and development cycles were counted in months rather than years, and two years easily could — and often really did — make all the difference in the world between what games became the overnight bestsellers and what games got left behind in the dust., forcing most developers to pick a side in the race. The fierce Console War between the Mega Drive and the SNES defined the era for most players, with advertisements from either company famously lobbing insults at how the opposition's games or hardware weren't good as their own.

In terms of actual game design, the 16-bit era wasn't as big of a leap as the 8-bit era was to the Golden Age. However, one notable technological improvement that sets this generation apart from 8-bit is the advent of "faux-3D" scrolling (i.e. Mode 7

). The most successful games of the 16-bit era were often fleshed out and refined versions of their 8-bit counterparts design-wise. Many successful series from the 8-bit era threw off their Early Installment Weirdness and gained many of their standards in this era, such as The Legend of Zelda in A Link to the Past. The industry made much bigger leaps in the graphics department. Games like Sonic the Hedgehog, Ecco the Dolphin, and Yoshi's Island were shining examples of Awesome Art with their well-drawn sprites and detailed environments. The releases of Mortal Kombat and Donkey Kong Country sparked a craze in Digitized Sprites on consoles, with notable games following suit including Vectorman and Super Mario RPG. The era also produced early experiments with Polygonal Graphics on home consoles, most notably Star Fox but also including arcade ports.

The Platform Game's popularity from the 8-bit era continued into this generation, highlights including the Super Mario Bros.' series fourth installment, Super Mario World and the aforementioned Mega Drive Killer App Sonic the Hedgehog. A permutation that became very defining for the genre in this era, however, was the platformer starring a Mascot with Attitude, as the popularity of Sonic the Hedgehog as a character inspired numerous imitators, both from Japanese and Western developers. One genre that was born, so to speak, in this generation was the Fighting Game. Spurred on by the revolutionary Street Fighter II, many studios responded to capitalize on its success, with Mortal Kombat being a notable entry for its pioneering violence which would lead to an eventual debate on the effect of violent video games on young society. Nintendo had up to this point maintained a censorship code akin to The Hays Code and The Comics Code, while Sega had created an MPAA-style ratings system, which allowed more freedom of content. Sega's allowance of blood in their console's port of Mortal Kombat (with a password) would result in it outselling the SNES port by a large marginnote "Large" as in the Genesis port outsold the SNES port six to one. Nintendo learned their lesson and Moral Kombat II was sold on the SNES completely uncut, resulting in bitter Congressional hearings and, eventually, the foundation of the Entertainment Software Rating Board.

The fighting genre wouldn't see as big of a revolution until Virtua Fighter in the Fifth Generation. The JRPG genre also hit its stride during this generation, with Square making some of the most well-loved titles in the genre of all time, such as Final Fantasy VI (marketed as Final Fantasy III in the Western hemisphere), Chrono Trigger, and Super Mario RPG; the success of these titles helped pave the way for wider mainstream success of the JRPG overall in the next generation.

Also in this generation, portable gaming systems began to gain traction with the release of the Nintendo Game Boy and Atari Lynx in 1989 and the Sega Game Gear in 1990. While the Lynx failed to gain much success, Nintendo and Sega's efforts gave gamers versions of their favourite franchises to take with them when they were away from their televisions. While Sega's system certainly benefited from its coloured screen, it was ultimately the Game Boy that would win out by a considerable margin, boosted by the inclusion of Tetris as a pack-in game making the system more appealing to those who weren't already interested in video games than Super Mario Land might (sound familiar?), though the fact that it was significantly cheaper, more pocket-able and had much better battery life also helped. Its success would continue into the next generation.

At the end of the generation's sales race, Nintendo and the SNES still came out ahead in numbers against Sega and the Genesis/Master System, but the competition between the two Japanese companies had been closer than ever before. But the rivalry would ultimately not last. In what can perhaps be seen as an Portent of Doom for how Sega would fare in the subsequent generations, Sega would attempt to both prolong the life of the Genesis/Master System and regain a technological advantage over Nintendo by releasing a couple of peripherals for the Genesis/Mega Drive, namely the Sega CD and Sega 32X , but both projects would turn out to be financial failures and were relatively quickly discontinued by Sega. Instead the company decided to instead focus on their next console, which would use the CD technology as a basis for its games, and would kickstart the next generation.

It must be noted, it wasn't that Nintendo had been entirely behind the curve on the potential of using the CD as a game medium. In fact, the company had been in talks with another Japanese company, Sony, as far back as 1988, about the development of a CD-based peripheral of their own for the SNES, and in June 1991, the two companies would even reveal that they had entered a partnership and were co-developing an entirely new CD-based console, called the "PlayStation". But already the very next day, Nintendo announced, in a massive surprise to everyone, including Sony, that they were desolving the partnership and was instead going to collaborate with the Netherlands-based company, Philips, Sony's most fierce rivial on the eletronics market. The exact reasons for Nintendo's sudden U-turn aren't entirely clear, as sources differ somewhat on what caused the 11th hour breakdown in negotiations between the two companies, but it was certainly an insult that Sony didn't forget, and they decided that maybe it was time to go into the console market on their own...

One might say this generation ended when the Super NES was officially discontinued in 2003 (having lasted a few years longer in Japan than America and elsewhere). But the Mega Drive, officially discontinued in 1998, has had an active afterlife; licensed games by third party developers have been sporadically released into The New '10s, and licensed Mega Drive units with built in games are still being sold today. The Super NES would later see similar plug-and-play units being released, if only for a limited time.

As an aside, this generation is also known for looking different depending on whether one lived either within or outside North America, with Sega's console having completely different brand names (Mega Drive or Genesis as aforementioned) and the Super Nintendo having very different aesthetics for its casing and colour scheme (the rounded, darker grey console and multi-coloured convex controller face buttons for the Super Famicom and European SNES, or the boxier, lighter grey console and purple convex and lavender concave face buttons for the North American SNES). While this didn't matter back then (since most people didn't have Internet access back then), this has led to online debates in the Anglosphere years later over which of Sega's console's brand namesnote especially over on The Other Wiki's article for Sega's console and the Super Nintendo's aesthetics were "better".

Consoles of this generation

Handhelds of this generation

Online services (yes, they did exist)