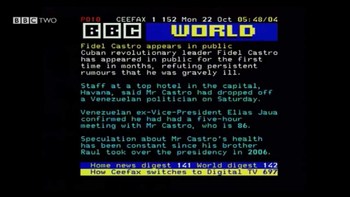 A screencap of BBC's Ceefax service from October 2012, right before the end

A screencap of BBC's Red Button Digital Teletext service as of June 2017, which replaced Ceefax after analog cutoff. While Analog Teletext used the ability to overlay itself over broadcast video sparingly, Digital Teletext absolutely abuses that ability.
Advertisement:

One of the coolest things on your TV before digital set-top boxes, on-demand movies and Freeview.

Teletext is basically a continuously updated news feed transmitted through your TV (in gaps in the signal), developed in the United Kingdom in the 1970s and being used worldwide.

Most notable for its limited number of characters, the general BBC Micro-ish look of the thing note which it came by honestly; Teletext pages were created using one and the fact that you'd at times have to wait for several pages to load, Teletext doesn't crash under heavy user demandnote However, if you have poor television reception, the service may be tenuous to use- the readability of the service correlates directly with how clear your TV reception is, and not having a good reception results in garbled or missing text, if anything comes up at all.. Before the Internet, this was the way you got the footy scores note Or if you're in Singapore, Malaysia, Hong Kong, and Spain, stock market information and lottery results. Memorably described as a pound-shop version of the Internet.

Pages have individual numbers, which can get memorable. 888 is the UK code to get Closed Captioning. Interactivity however, was limited to a minimum. Typically, only the first 700 pagesnote The page count starts from 100 and ends at 899 are used normally, anything above page 800 was reserved for special services like captioning or real-time pop-up displays during special events. Due to teletext's broadcast-only nature, interactivity involves a "Show" button (essentially technology similar to the spoilers tag used here on TVTropes, except that it's triggered through a button on your TV remote), "Choose-your-adventure" style page-flipping, or on more advanced systems used in some European countries, calling a number on your phone (although the outcome of your choice is visible to everyone using the service). Notably, page search took some time before at least the transition to digital, and also at least in the past if a page did not exist, it would keep looking for it ad infinitum.

On most services, one can also get the time and channel name from Teletext; several TV sets from Sony sold in Europe and Asia could display the channel name under the channel number if Teletext was transmitted on the channel; additionally a button on the remote could bring up the current time and date for several seconds.

Teletext Limited, the company responsible for the ITV and Channel Four services, had a handful of other businesses, including a holiday shop TV channel, which will remain open—and oddly, continue to use the Teletext brand.

Teletext never really took off in the US, though. Multiple networks made attempts, but failed. TBS (or, as it was known then, Superstation WTBS) had a service called Electra

for a while in the 80s, but it was shut down due to lack of interest and funding (the other partners in the venture, Zenith Electronics and Taft Broadcasting had stopped making Teletext-capable TV sets and undergone corporate buyouts, respectively). Complicating matters was that a competing, incompatible Teletext system backed by CBS and NBC called NABTSnote North American Broadcast Teletext System was also pushed to the market- TBS had used a modified-for-NTSC version of the World Standard Teletext system, which is what the Ceefax system is known as outside of the UK. NABTS was superior to WST in that it could display advanced graphics, but that only drove the cost of receivers and TV sets up as it required a far more powerful CPU for decoding the graphics and text. Adding to that, the fact that TV sets only supported one or the other but not both made choosing a Teletext-capable TV even harder and contributed to the waning of interests in the feature. Nonetheless, a lot of TV sets in North America are still sold with a remote with the red, green, blue and yellow buttons used for teletext, baffling consumers many years after teletext have been forgotten about in the region, and perhaps hinting that digital teletext may appear atop the ATSC digital standards someday. (Typically said colored buttons are used for various other functions by the TV, and if it can control other devices like a Blu-Ray player that also has colored buttons, then it can perform those button functions too.)

There was also an attempt to launch Teletext in Japan, predominantly backed by NEC. The service, transmitted under various names including Telemo and Moji2 (pronounced Moji-moji), uses yet another version of Teletext known as JTESnote Japan TEletext Specification. It had modest popularity, perhaps not as popular as the rest of Asia and Europe that the rest of the world had almost never heard of it, and it was launched with little to no fanfare in 1985, but it was long-lived and was transmitted right up until analog shutdown.

In the late 90s, an updated version of Teletext was introduced. Called Hi-Text, it finally caught up with the NABTS and JTES systems in that it offered a higher resolution display and vector graphics support. However, the system faced stiff competition from the Internet and waning interests in teletext technology, and thus was only adopted by several North European countries.

Side note: Teletext never really died, it just evolved. The successor to Teletext is made out of several digital text standards (mostly DVB-TXT, DVB being the digital standard that replaced PAL and SECAM which were used in countries where Teletext was popular, and MHEG-5, the markup language used to design a digital teletext page). As TV becomes increasingly digital, these services moved to a richer-experience albeit less enjoyable digital format, if not discontinued outright. ITV, Channel 4 and Channel 5 ended their service on December 15, 2009, more than two years before the analogue cutoff. However, the digital format is still in use in several Northern European countries as well as in Australia and Hong Kong. Likewise, Ceefax was reincarnated as Red Button[1]

when converted to it's Digital Teletext form, named after the button on the remote that brings up the service.