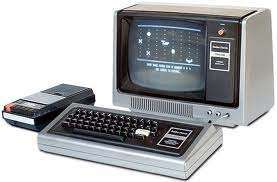 Model I in its original bare-bones configuration. Data storage was via the cassette tape recorder. Graphics shown are maximum resolution.
Advertisement:

The TRS-80 (short for Tandy Radio Shack Z-80) was Radio Shack's entry into the consumer microcomputer market; introduced in 1977, it was soon outselling the Apple ][ and Commodore PET. The first version offered, known as the Model I, had a black-and-white display with character mode graphics, and could not support a disk drive or more than 16K of memory without adding on a special "expansion interface" that normally sat beneath the monitor. It had no sound hardware, though games managed to produce sound effects by manipulating the cassette port with some sort of speaker plugged in.

Since the keyboard was built into the CPU cabinet — indeed, in the case of the Model I, the keyboard was the CPU cabinet — it was impossible to change out your keyboard if it went bad. This made the keyboard's susceptibility to "keybounce" paarticcullarlllly annnnoyyyingg.note Radio Shack even sold keyboard debounce software called KBFIX, which introduced a slight delay between keystroke detections, to get around this problem. This and other "features", such as abysmally low-resolution graphics, led to the derisive nickname of "TRaSh-80"— which some fans have since reclaimed as a term of affection.

Tandy also capitalized on the TRS-80 brand name by using it to promote other, incompatible computers; the most popular of these were the TRS-80 Color Computer and the TRS-80 Model 100 Portable Computer (a battery-powered LCD-screen laptop).

This platform was the birthplace of the first home computer Interactive Fiction game, Scott Adams' Adventureland. It was also the first PC to which Infocom ported Zork, which had previously lived on Mainframes and Minicomputers.

Original to the TRS-80