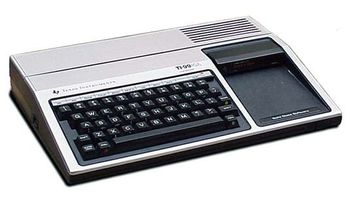 Texas Instruments is a very old and respected maker of electronics components. TI employee Jack Kilby co-invented the integrated circuit (or chip) in 1958, and TI chips can be found in most electronic devices including a great many computers and video game consoles although the only remaining consumer product with the TI name is their graphing calculator line; they have a near-monopoly in North America on them for student use, and their prices and (lack of) technical advancements reflect this.

As TI found out in the early 1980s, selling chips to computer companies and selling home computers to the general public are very different things.

Following the success of the Apple ][, TI decided to get into the home computer market with an 8-bit machine that would showcase TI's engineering. The CPU, graphics, and sound would all be TI custom chips. Unfortunately, the CPU didn't work, so TI brought in a proven 16-bit CPU, the 9900, and used a bunch of "glue logic" to make it emulate the failed 9985. This made the new computer the first 16-bit home computer, albeit a very odd one that behaved much more like the other 8-bit computers of the time.

The first model, the 99/4, was released in June 1979 and didn't sell well. The 99/4A replaced the 99/4's chiclet keyboard with a full-travel keyboard and added a bitmap graphics mode. It was released in June 1981, and was a big success for about a year. Then the Commodore 64 showed up, and TI got into a price war with Commodore. By early 1983, TI was selling them at a loss and left the home computer market by the end of the year. The 99/2 and 99/8 were only produced in limited quantities as prototypes, though the 99/8's architecture has a striking resemblance to the Tomy Tutor.

The 99/4A was well-liked, with graphics and sound comparable to the Commodore 64, and way above the 64's predecessor, the VIC-20. But TI's insistence on complete control over software meant that its library was very small. That, combined with a hardware design that was expensive to manufacture, doomed it in the marketplace.

The graphics and sound chips would go on to better things, finding their way into the MSX, Colecovision, SG-1000 (ancestor of the Master System), BBC Micro, IBM PCjr, and the Tandy 1000 (a more commercially successful clone of the PCjr). The Sega Master System, Genesis, and Game Gear used derivatives.

As a side note, it brought us a rather bizarre TV spot

featuring none other than Bill Cosby.