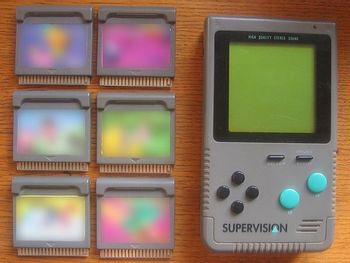 The original design of the Supervision with some games, their faces blurred out of shame.
Advertisement:

The Supervision was a handheld game console first released in North America in 1992 by East Asian company Watara. It was meant to be a low-cost alternative to the Nintendo Game Boy, but failed hard due to its screen being much blurrier than the Game Boy, the lack of third-party support (with most of the developers being from Taiwan and Hong Kong), and most games being clones of others. One example was the pack-in title Crystball, which was a Breaking Out game.

In order to cut costs, Watara farmed the Supervision out to other companies for international distribution such as joystick manufacturer QuickShot in the United Kingdom. The system was also sold under other names such as Hipervision, Tiger Boy and Travellmate. A redesign with an adjustable screen, as well as a proper D-pad as opposed to four buttons in a diamond shape, was later released.

The Supervision was compatible with a second player via a link cable, just like the Game Boy. It even had a "TV Link" dock peripheral that connects the handheld to a TV to play games on the big screen (...that now sounds familiar 25 years later), which to its credit was a lot more convenient since you didn't need a second console to do it. A full color link was also planned, but cancelled due to the system's failure.

The Supervision made an appearance as a prize on Legends of the Hidden Temple and the 1994 syndicated version of The Price Is Right. Gee, we're sure everyone was excited to win one of those.