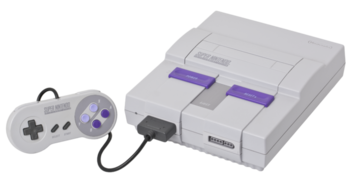 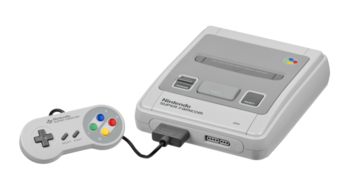 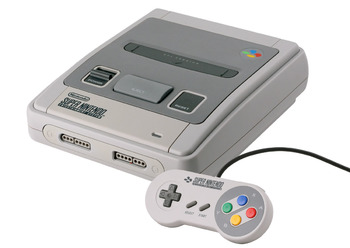 From top to bottom: The North American Super NES, the Japanese Super Famicom, and the European Super NES.
"Now you're playing with power. Super power."
— The first slogan, carrying over from the NES
Advertisement:

The Super Nintendo Entertainment System (SNES), or Super NES for short, was made to keep up, and so began one of the fiercest Console Wars in history. It was known as the Super Famicom in Japan (officially adopting the "Famicom" nickname of its predecessor, the Family Computer) while in South Korea, it was known as the Super Comboy (슈퍼 컴보이) and it was distributed by Hynixnote Korean laws at the time banned most Japanese imports, including electronics, so it had to be manufactured locally under license. While the Super NES was very much a success (eventually matching the rival Genesis in market share), Nintendo would still make some mistakes behind the scenes. Nintendo originally had a deal to make a CD-ROM drive for the Super NES, and signed with Sony for the latter to make the device. But the contract for the add-on Sony made included a clause where Sony would receive all software royalties. The President of Nintendo, Hiroshi Yamauchi, decided to drop the contract and sign with Philips midway through development (and behind Sony's back), which turned the relationship into a rocky one. Eventually Nintendo, Sony, and Philips consolidated forces to work on the CD add-on, until Sony decided to go it alone, using the already-constructed hardware to launch their own console, the PlayStation.

Possibly the most important and enduring contribution of the Super NES was its controller design. Not only was it the first controller to feature shoulder buttons, but also the first to sport four face buttons laid out in a cross shape to mirror the position of the D-pad. These two design elements have become the basis of pretty much every gamepad ever since, though it wasn't until Sony decided to copy it for the PlayStation that it really took off as the standard.

A smaller version of the console was issued in North America (the model SNS-101) in 1997 and Japan (the Super Famicom Jr.) in 1998. The slimmed-down redesign removed the expansion port (meaning the SFC Jr. was incompatible with the Satellaview), the RF output (though the Nintendo 64's optional RF modulator was compatible), and the eject button. Support for S-Video and RGB output was also Dummied Out, though console modders could reinstate those features without any additional hardware. PAL regions did not receive the redesigned console. Internally these consoles use the 1CHIP-03 revision which unifies the CPU, PPU1 and PPU2 into a single package and with some modifications can output the cleanest RGB video signal at the cost of some minor graphical issues with certain games. note  This is because the 1CHIP motherboard revision fixed certain bugs and flaws present in earlier revisions which lead to minor compatibility issues with less than 20 games.