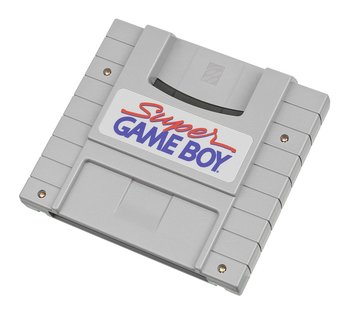 The North American design for the Super Game Boy 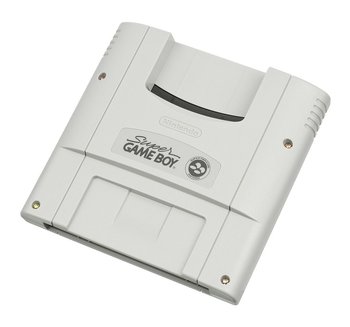 The Japanese and European design for the Super Game Boy 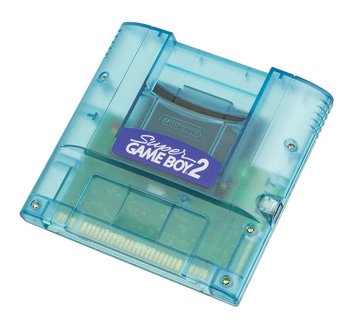 The Super Game Boy has the following other features:

The device was sold for about 60 USD, and was packaged with a player's guide — not so much a guide to a particular game (though it did have detailed information about some more popular Game Boy titles) as it was a bunch of suggested uses for the Super Game Boy and an extended manual for it. For example, it suggested palettes for use in various games, including some alternate palettes to get the effect of some scenery. It also talked about potentially amusing or challenging uses, such as palettes that cause Mario in Super Mario Land to be completely invisible, or the idea of drawing a big star on top of Mario ("This star doesn't make Mario invincible — quite the opposite, actually!")

A Super Game Boy 2 was later released in 1998, but only in Japan. It had a different set of default borders, but mostly retained the same features. Some games, such as Tetris DX, had custom borders that were compatible only with SGB 2. It also fixed the clock speed; the original Super Game Boy ran 2.4 percent faster due to using a divided SNES clock,note The clock crystal in the NES and SNES is tuned to six times the NTSC color subcarrier frequency, or 945/44 = 21.48 MHz. The original SGB divides this by 5 to produce a 4.295 MHz clock for the Game Boy chipset, as opposed to the original Game Boy's 2^22 Hz = 4.194 MHz frequency. while the SGB 2 uses the same exact clock speed as the Game Boy. But most notably, the SGB 2 included Game Link cable functionality — if you couldn't trade Pokémon on the original SGB, now you can, provided you have another Game Boy.

Unfortunately, the SGB and SGB 2 can't play Game Boy Color–only games, due to the fact that both peripherals use the circuitry of an original Game Boy.

goes over how games used its enhancements - or, more often, didn't use them well or at all, resulting in the SGB being a missed opportunity. Don't let the title fool you; it's actually a good read.

List of games that had Super Game Boy functionality:

All Game Boy games work on the Super Game Boy.

The following games have special features for the SGB, such as custom borders and custom colors.

This list is incomplete; please help by adding appropriate entries to it.note The Other Wiki has a more complete list.

This peripheral shows examples of: