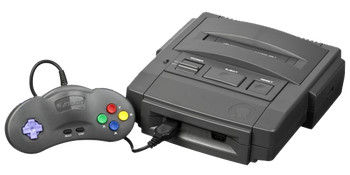 A noble but ultimately half-hearted attempt by Funtech, a subsidiary of UMC

, to compete with the more established consoles, the Super A'Can marked a departure from the countless NES clones and bootleg games being churned out by shady companies in Taiwan and China during the 80s and 90s.

By the looks of it, you'd initially think this is nothing more than an SNES clone, and there is indeed a resemblance. Under the bonnet however is a Motorola 68000, the same architecture as used in the Sega Genesis and Apple Macintosh amongst others. By all intents and purposes, this made the A'Can essentially a Genesis of sorts, though on paper it boasted superior capabilities to the Genesis and SNES with faster clock speed, bigger RAM, the same amount of colours as the SNES, 16-channel PCM audio, as well as bigger and more sprites per screen...

...if not for the fact that it was released too late in the market, just as gamers were more excited about the real next-generation consoles - the PlayStation, the Nintendo 64 and the Sega Saturn, all of them obviously able to effortlessly smoke the A'Can both on paper and in practical terms. That, coupled with the combined mind share of foreign consoles versus a homegrown console nobody has heard of, let alone care about, along with UMC's dubious reputation for copyright and patent infringementnote UMC infamously produced chipsets and related circuitry used on NES clones and bootleg cartridges, much to Nintendo's dismay, besides a clone of the Intel 486 called the Green CPU

, sealed the A'Can's fate and brought the console and Funtech to oblivion. With the console discontinued, unsold units were scrapped and UMC left the console business, shifting its focus on being a merchant foundry instead, manufacturing chips under contract for various OEMs.

Plans for peripherals similar to the Genesis, namely a CD-ROM add-on and a 32X-esque co-processor were announced, but those never panned out due to the console's failure, leaving the expansion port on the A'Can unused.

Despite being of little value to all but the most dedicated of video game historians and collectorsnote It's actually considered a, if not the, holy grail of console collecting due to its rarity outside Taiwan (it's been said that you can count the number of A'Cans in North America on one hand) but given that games are just as hard to find as the console and there's not many of them to begin with it ends up being just a display piece. In other words, this is what collectors go for when they've already acquired everything else. If you really want one your best bet is simply going to Taiwan and seeing if any used games stores have one, though they're not particularly common even there, especially 25 years later, the A'Can became an interesting footnote in video gaming history owing to it being perhaps one of the few original video game hardware released by a Taiwanese company, besides living on in the form of a MESS emulator core

Tropes associated with the A'Can include: