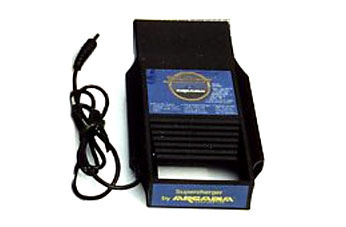 The Wonder Device
In 1982, a small company called Starpath released an accessory for the Atari 2600 called the Supercharger. The Supercharger plugged into the 2600's cartridge port, and added 6K of RAM and a cable that plugged into any audio cassette deck's headphone jack. (You provided the tape deck.) The idea was to distribute games on cassette rather than cartridge, reducing their cost. The Supercharger did more than that though. It allowed all of its memory to be used as RAM (in addition to the 2600's 128 bytes, for a total of 6 1/8K), where ordinary cartridges were stuck with 4K or 8K of ROM and 128 bytes of RAM. And it allowed developers to test their games more quickly.

Three of the Supercharger's games are considered among the best ever made for the 2600: Dragonstomper, Escape From The Mindmaster, and Phaser Patrol. These games were equal to what was being made for home computers like the Apple ][, Atari 8-Bit Computers, and Commodore 64. The Supercharger version of Frogger ranks up here as well, being more faithful to the arcade version than virtually any other port of Frogger released in the late Golden Age.

The Great Video Game Crash of 1983 was the end of Starpath; it was bought by Epyx. The games were later re-released on CD as Stella Gets A New Brain.