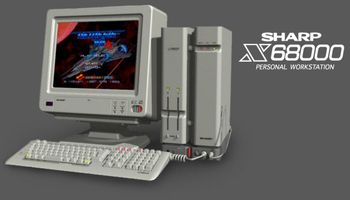 The Sharp X68000 was a Japanese personal computer produced between 1987 and 1993. Commonly known as the X68k, it came in a striking double-tower case and was a highly advanced machine for its time.note Only behind the Commodore Amiga. It should be noted that the Amiga, while not popular in Japan and thus practically non-existent as a gaming platform (and if it was popular in Japan, expect hentai games made for it) in the country, has its niche there in subtitling, video edition, music and above all, CG design, since it was the only consumer-grade computer able to handle 3D graphics with ease whereas the X68k, while powerful, could only handle 2D, and its music capabilities were restricted exclusively to FM sound and MIDI; the latter was, ironically, one of the few things the Amiga was poor on handling. Any Japanese user who wanted something more accessible in their own language in order to create 3D had to spend money on a Silicon Graphics workstation, which cost about at minimum $250,000 (in 1990s prices) and they were out of reach for many non-professional Japanese users.

Unlike its main competitor, the PC-98, the X68000 was designed to be as much of a gaming machine as a business machine; the original model came bundled with Gradius. Also unlike the PC-98, the FM Towns and the IBM PC, the X68000 uses a different CPU (Motorola 68000) and a different operating system (Human68k, it works like MS-DOS, but was incompatible with it), making it completely incompatible with the aforementioned computers, not even textmode-only programs from PC-98, FM Towns or IBM PC would run.

The X68000 was a 16-Bit (later 32-bit with the 68030 CPU) home video game system, rivaling even the arcade-quality Neo Geo console (later X68000 models helped out in the graphics department and added an eight-channel PCM chip into the mix, yet the latter was mainly an add-on). Capcom made it the prototype and the basis for its SDK unit for its CP System (CPS) arcade board, and many of the X68000's releases were Arcade Perfect Ports. In fact, former Capcom composer/sound programmer Hiroaki Kondo is credited as "X68K" in the games he worked on.