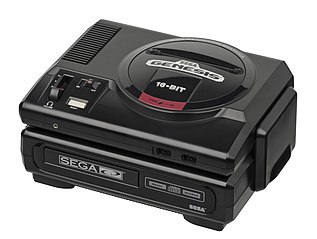 The Sega CD, also known as the Mega-CD in Europe and Japan, was a CD-based add-on for the Sega Genesis. As its name would suggest, it allowed the Genesis to take advantage of the higher-capacity CD-ROM storage medium, enabling features such as Full Motion Video and Red Book CD sound. Unfortunately, the Genesis'/Mega Drive's own processing power wasn't quite enough to take advantage of these features to the fullest. It was released in 1991 in Japan, with North America getting it in 1992 and Europe in 1993. The launch price was $299 (£270 in Great Britain), twice of that of the Genesis itself after it was given a price cut in 1991.

The Sega CD came about because Sega heard rumors of Nintendo's deal with Sony to develop their own CD add-on, and also because NEC had just released a CD attachment for their PC Engine console. (Ironically, the SNES CD-ROM wound up becoming an albatross and never saw releasenote By Nintendo anyway, the "SNES-CD" would later be re-purposed by Sony as the PlayStation; Sega wasted no time in mocking Nintendo for this in their ads for the Sega CD.) Sega jumped the gun and pushed out their own attachment as a countermeasure: it allowed the Genesis to perform tricks similar to the SNES that would otherwise be impossible with the original hardware, such as Mode 7 effects and sprite rotation.

The add-on is probably best known for its association with Full-Motion Video games. While not the first or even last machine to host FMV games, they were prominently featured in Sega's aggressive marketing and a fairly common part of the library thanks to Digital Pictures, a major proponent of the game genre. The most notable of these FMV games was Night Trap, which obtained infamy by being featured at a U.S. Senate hearing concerning portrayals of violence in video games and contributing to the creation of the ESRB. Hosting live action footage on a home console was impressive for the time, but it was heavily degraded by the Genesis's palette limitations and the visuals have aged poorly. (The few CD games that also supported the 32X add-on don't suffer from this issue and fared much better.) To quote Digital Pictures co-founder Ken Melville, "[footage was reduced to] the most horrifying, blurry, reduced-color-palette mess imaginable." The FMV games themselves also quickly gained a reputation for being shallow experiences not worth buying, which contributed to turning people away from the CD.

The Sega CD also received a number of enhanced ports of Genesis games, though many didn't have substantial changes outside of improved soundtracks and a bit of extra content. Despite ending up with a sizable library, the add-on was criticized for being improperly supported between the poorly-received FMV games and ports that didn't justify the high asking price. While completely original, non-FMV, and actually good games do exist for the Sega CD, they're very few in number and are often overshadowed by the library's poor reputation, with recognition of them being limited to the most hardcore of fans or retro enthusiasts. The only Sega CD game to break into mainstream consciousness as "good" is Sonic the Hedgehog CD, if only because of the sheer weight of the Sonic the Hedgehog brand recognition. Even then, it has become a rather divisive entry amongst the fanbase.

In addition to its tepid audience response, the Sega CD is also seen as a commercial failure, only selling 2.4 million units. (Compare the 30 million Sega Genesis units sold.) While not as disastrous as the later 32X add-on, the lacking reception and sales were the first signs of Sega's eventual decline during the mid- and late-90s that would lead to them leaving the console market. The combination of this and the PC Engine CD's poor sales outside of Japan (as the TurboGrafx-CD) are also credited as a likely factor in Nintendo choosing to stick with cartridges for the Nintendo 64 — right when CD-ROM technology became more readily practical for game developersnote Piracy may have also played a factor in Nintendo's decision. The absolutely rampant piracy of the Famicom Disk System wasn't that distant of a memory and it ended up possibly even more rampant on the PlayStation, to the point that by the end of its life there were probably more pirated games in circulation than real ones. Probably worth noting here that the first wave of CD-ROM based systems (including the Sega CD) had NO copy protection whatsoever, which people figured out pretty much immediately once affordable CD burners became a thing. Oops.

Today, the Sega CD is generally understood as having had a lot of potential that was sadly never utilized by most developers, with its main stumbling blocks being the Loads and Loads of Loading, poor marketing, high launch price, and the fact that it required both a plug into the Genesis and an independent power adapter. It's seen as a decent addition to any Retro Gaming collection due to its unique software and enhanced Genesis ports, though many of the rarer games have become extremely valuable and thus expensive to purchase secondhand.

Tropes associated with the Sega CD: