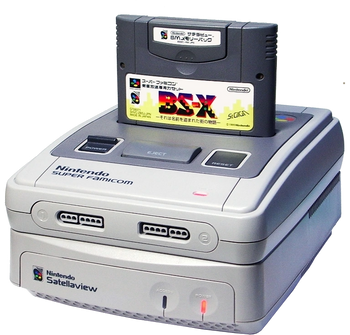 ◊
[...] what the future used to look like.
—The description of the in-game Satellaview outfit in Super Mario Odyssey
Advertisement:

Even most hardcore Nintendo fans don't know what this is, never mind having actually played one, partly due to a combination of No Export for You and one of the more bizarre examples of Keep Circulating the Tapes in video game history.

Some time after the SNES CD-ROM was canned (cue Epileptic Trees about a Plan B), Nintendo signed a deal with St.GIGA (a now-defunct Japanese Satellite Radio company) to have a Super Famicom add-on which allowed users to both download software and stream Satellite Radio. This setup was eventually released in 1995 as a special-mail-order, subscription-based service.

The add-on had a bit of an unusual setup — downloads were broadcast in timeslots much like radio and TV shows. Some downloads were expected things like old Super Famicom releases, demos of new games, and original game content. On the stranger side were some downloadable magazines full of Japanese celebrities drawing Squicky pictures of Mario with an Asian face. While snagging all this content, the Satellite Radio would stream various programs which attempted to tailor to the gamers' tastes, and were hosted by J-Pop Idols and comedians.

Eventually the bright idea came around to have a game set up to play alongside the Satellite Radio playing unique game-specific audio, and thus the Satellaview's most remarkable and famous accomplishment was noted — the SoundLink games, which did just that, using the functionality to bring new stories for some of the Super Famicom's most prominent titles, like The Legend of Zelda and Fire Emblem: Mystery of the Emblem.

Unfortunately, most of the Satellaview's unique features came with "catches" that would lead many to turn "BS" into an Incredibly Lame Pun (for reference, the original meaning is a generic Japanese term for "Broadcasting Satellite", tagged onto various programs transferred via satellite). The Satellaview is one of the first notable examples of DRM used in console gaming — many games were set up to have limited boot-ups, and many others were only allowed to play at the specific broadcast times. Much of the contents are presumed to be lost forever because of the limitations of people merely being able to download data.note Well, at least more of it was recovered than the Sega Channel.

Much of the actual capabilities of the Satellaview were unknown to the non-Japanese for the longest time, leading to various rumors and misinformation. Fortunately, quite a lot of the issues can be cleared up by watching various video archives of gameplay from the original broadcasts on Nico Nico Douga. The Satellablog

is devoted to recovering and archiving footage of and info about the Satellaview, and is perhaps the most complete English-language resource on the Satellaview there is; it's related to a project which aims to eventually restore as much functionality as possible to Satellaview emulation, possibly including SoundLink transmission. The Other Wiki

has some very in-depth information on the technical side of the system. An equivalent for the Nintendo 64 was apparently planned (with cable and internet hookups!), but never progressed beyond prototype stage.

To date, only two Satellaview titles have been rereleased in any form: the four BS Fire Emblem chapters, remade as bonus content in the 2010 Nintendo DS remake of Fire Emblem: Mystery of the Emblem (though lacking the original voice acting); and Radical Dreamers, as part of a HD remastered version of Chrono Cross released in 2022.