An island country in Central Africa, São Tomé and Príncipe, officially the Democratic Republic of São Tomé and Príncipe, are two islands in the Gulf of Guinea off the coast of Gabon with tiny islets around them, São Tomé being the larger southwestern island with the capital and largest city of the same name, and Príncipe being the smaller northeastern island. The country is the second-smallest and least populated country in Africa after Seychelles, and the smallest and least populated Portuguese-speaking country in the world.

Uninhabited until they were discovered by the Portuguese in the 15th century, the islands were colonized by the Portuguese, and quickly turned into a slave depot, with the volcanic soil of the islands being suitable for sugar production. Large numbers of Africans were enslaved from the mainland and brought there, and the islands became Africa's foremost exporter of sugar in the mid-16th century. However, sugar cultivation in the islands soon declined from competition in the Caribbean, and by the mid-17th century, the territory turned into a transit point for ships engaged in the Atlantic slave trade between the West and continental Africa. While Portugal officially abolished slavery in 1876, the practice of forced paid labour continued under the roças system, and in the early 19th century, cocoa and coffee were introduced, becoming the country's cash crop. São Tomé became the world's largest producer of cocoa in 1908, and while Ghana and the Ivory Coast have overtaken it in the present, it still remains the country's most important crop.

São Tomé and Príncipe eventually achieved independence from Portugal on the 12th of July, 1975, and later became one of the first African countries to undergo democratic reform and changes to the constitution in 1990 - in particular, the legalization of opposition political parties – which led to elections in 1991 that were free, nonviolent and transparent. 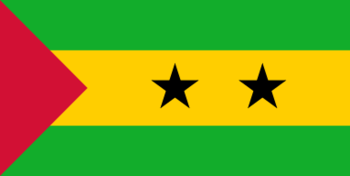 This flag consists of a red triangle situated at the hoist, with three horizontal green, yellow and green bands charged with two five-pointed black stars at the center. The red evokes the struggle for independence as well as equality, the green alludes to the plentiful vegetation of the country, the yellow stands for the tropical sun and cocoa, a key agricultural crop for the nation, and the two stars on the yellow band represent the two islands that make up the country.