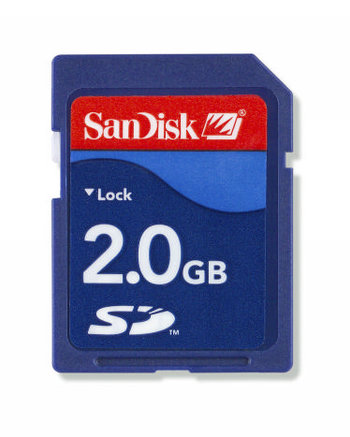 The winner of a relatively low-key format war, the Secure Digital Card, or SD Card, is a removable flash memory device meant to hold data from consumer electronics. Most notably digital cameras and recorders, cell phones, and gaming systems like the Nintendo Wii and Nintendo 3DS.

During the mid 90s with portable devices needing storage starting to emerge, SanDisk created the Compact Flash format flash device. Being a flat card of about 38mm x 25mm x 3mm, it was quickly met with other competition from Intel, Toshiba, and Sony. By the late 90s, SanDisk had created another format, the Multimedia Card, to compete with the other offerings as Compact Flash wasn't as compact as the other formats; by then memory cards were about the size of a postage stamp and less than 2mm thick. Multimedia Card ultimately won out because of its open standard, while everyone else was using proprietary formats. It was also very easy to interface to, which was very useful in small electronic devices. The only standard to stubbornly stick to the end was Sony's MemoryStick, which strangely enough was co-developed with SanDisk; much like Sony's other failed media formats (the Betamax, MiniDisc and the UMD) it was little used outside of Sony's various product ranges (including Cybershot cameras and Handycam camcorders, VAIO PCs, various mobile devices (including their Clie PDAs and mylo web gadgets), the PSP as well as early models of the PS3 which had built-in card readers; even Sony TV sets had MS slots).

CompactFlash is still around though, mostly enjoyed by professional photographers, who like it because due to its relatively large size it can contain a lot of flash chips and thus the enormous amount of data: nowadays a 512 GB CompactFlash is nothing special, enough to hold dozens of HD movies.note This also allowed the modern high-end DSLR cameras (like Canon EOS 5D Mk II and above) to suddenly become the favorite tool of independent and sometimes even professional filmmakers. It's also popular among hobbyists who found it very easy to connect to the old computers, as the CompactFlash interface is virtually identical to the IBM Personal Computer IDE hard disk interface and needs only a pin converter to look like a hard disk to an oldtimey PC.

The SD Card evolved from the Multimedia Card. Features included, as the name implies, security features to allow for write and password protection and DRM. Some physical features were added to enhance reliability. Otherwise the two standards are roughly the same. As technology progressed, the demand for smaller and smaller cards cropped up, causing the Mini- and then Micro- SD card sizes to become available. You can easily use adapters (which often come with the cards) to make the smaller cards fit into full-sized SD card slots.

Later improvements to the SD card formula include specifications of High Capacity (SDHC, supports up to 32GB) and Extended Capacity (SDXC, hypothetically supports up to 2TB), which quickly allowed SD Cards to carry increasingly impressive amounts of data, a fact that helped multi-megapixel digital cameras, tablets, and smartphones to load up on large and beautiful pictures and video. The largest capacity in SDXC cards available commercially as of 2019 is 1TB, making it the most dense memory storage in the world. A new SD Card model is in development called Ultra Capacity (SDUC, hypothetically could support up to 128TB, though it's still quite far away).

To keep up with the increasing storage capacity and the demand for faster write speeds required by HD-capable multi-megapixel cameras, flash memory speeds in SD cards were developed further, resulting in Class ratings for SDHC (Classes 4 and 10) and UHS (Ultra-High Speed) ratings for SDXC cards. Older and slower cards can still work for basic usage, but due to technical and memory limitations in cameras, fast cards are required for HD video recording.

Another technology made available for SD cards is the Flucard

, that allows you to directly transfer data out of the card via wireless.

As a bit of trivia, one may notice that the "D" in "SD" looks like an optical disc, despite the format being solid-state. The reason being is Toshiba and Panasonic were also involved in the development and marketing of the SD Card, and they happened to have an "SD" logo they could reuse: the one for the "Super Density Disc" that would be a candidate of the DVD format.