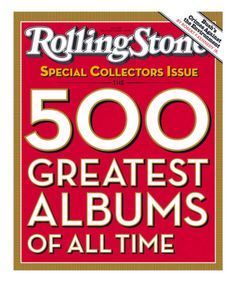 was published on September 22, 2020. Please update this page to reflect the changed rankings.

Rolling Stone Magazine's list of 500 Greatest Albums of all time. First begun in 2003, a new list was issued in 2012, this time considering albums released during the 2000s. A third revision came out in 2020, considering albums released during the 2010's and placing greater focus on works by female artists, artists of color, and artists from previously underrepresented genres (most notably hip-hop). Albums (and artists) that have not yet been added to TV Tropes are listed in Red Markup; we would appreciate it if tropers would scroll through the list and add these pages.

The more recent 2012 list replaced 38 albums on the 2003 list, either with newer albums or with albums done by similar artists in the genre, and the 2020 list replaced an even greater number of albums, adding back in some albums that were dropped in 2012 and incorporating 154 albums that weren't on either the 2003 or 2012 editions. For the 2003 release, Rolling Stone compiled 273 weighted top-fifty lists by various artists, producers, industry executives and journalists; the magazine editors then used those lists to assign each featured album to a spot according to its popularity. The 2012 list is more revision-based, with 100 experts

either changing some selections or adding new ones. These experts include artists who are in the list, though the majority tend to be artists, record producers, or even critics who do not make an appearance. The 2020 list meanwhile polls "more than 300 artists, producers, critics, and music-industry figures;" the greater focus on artist opinions thus allows for a more thorough view of what is considered "great" by offering perspectives from the people who make the works themselves.

Of note is that the list is not limited solely to studio albums; the list also includes greatest hits albums, rarities compilations, and live albums that have been heavy subjects of acclaim and/or popularity over the years. Whether or not this has a positive or negative effect on the list is up for debate, but the fact that it prioritizes influence rather than subjective quality does add credence given the number of non-studio albums that have acted as gateways for various musicians when they were starting out or seeking to reinvent themselves.

The results tend to favor "testosterone-fueled vintage rock", according to one reporter. Various demographics do remain underrepresented; female solo artists or bands with female artists only account for about 10% of the additions, and contributions made by minorities such as Hispanics and Latinos, Asians, and even non-British Europeans remain few and far-between— in fact, the entirety of the albums in the latest list are sung in English (when they're not instrumental). The selections have also been criticized as putting too much emphasis on rock and all its subgenres, and thus designate the positions to mostly white American musicians or British musicians. Moreover, the newer artists included in the 2012 revision remain at the bottom, while the top 50 seems to favor deceased artists, artists who are revered by consensus, or older albums that have since had a chance to be Vindicated by History.

Nevertheless, even younger critics maintain that despite the racial, generational, and gender bias, most albums on this list do remain worthy of the title "great." In addition, most albums aren't ranked based on the quality of their music, but their importance and influence in the Western music canon. It's also important to keep in mind that most of the experts who contributed to the 2003 and 2012 lists are Baby Boomers; rock and its subgenres maintained their identity and their way to connect to the world.

By no means is this a definitive list, but it's an important guideline to view how these influential artists continue to shape the future of popular music to this day.

Note: This is the 2012 version of the list; because of how recent the 2020 edition is, everything below here does not accurately reflect the current standings. The list will be updated to reflect the new rankings.

Albums from the 2003 listing that were dropped in the 2012 revision: