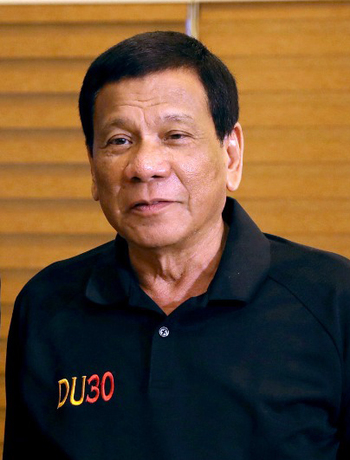 O B O S E Nnote Kill 'Em All (with an accent)
"We cannot move forward if we allow the past to pull us back. Finger-pointing is not the way. That is why I will not waste precious time dwelling on the sins of the past or blaming those who are perceived to be responsible for the mess that we are in and suffering from."
— First State of the Nation Address, July 25, 2016

Rodrigo Roa Duterte (born March 28, 1945) is the 16th President of the Philippines, succeeding Benigno "Noynoy" Aquino III in 2016. Born of a teacher-activist and a governor, he graduated law in 1972, passed the bar during the same year, and spent much of his early professional life as a prosecutor at Davao from 1977 until 1986, when the resulting government from the EDSA Revolution appointed him as officer-in-charge of the city. As divorce remains illegal in the country, he is only annulled to his ex-wife Elizabeth Zimmermann, and is currently with his common-law wife Cielito Avanceña. In total, he has four children: three with Zimmermann (current Davao City mayor Sara, vice-mayor Paolo, Sebastian), and one with Avanceña (Veronica).

The first president to hail from Mindanao and the oldest ever to assume office, he governed as mayor of Davao City from 1988 to 1998, 2001-2010, then 2013-2016. Many have credited him with overseeing the city's transformation from a Wretched Hive to one of the most progressive in the country, and his controversially tough stance on crime - bordering on outright support for vigilantism - which led him to be called by Time Magazine as "The Punisher."

Got elected in 2016 with the promise to curb crime, corruption, and illegal drug trade after a tumultuous and intensely polarizing campaign, and without doubt the most controversial among the five candidates due to being Sir Swears-a-Lot and his alleged links with the vigilante group Davao Death Squad.

Sticking to his promise, the Duterte administration has mainly focused on stomping illegal drug trade. Despite the massive numbers of voluntary surrenderers and arrested drug personalities (source

) the overwhelming focus on the deaths from these anti-drug operations have sparked widespread calls for investigations by human rights groups. Other notable initiatives launched by Duterte's administration include the pursuit of an independent foreign policy (read: opening up ties with Russia and China), peace talks with both communist (later shifted into an all-out war) and Islamic secessionist rebels, cutting down red tape, pumping out tons of money for infrastructure to relieve the severely-gridlocked capital, and his other pet advocacy, shifting the country's political system into a federal one.

Any PR person would consider him as their worst nightmare, considering how he constantly defies being a Slave to PR. He has to date managed to cuss out The Pope, Barack Obama and the entire European Union, and liken himself to Adolf Hitler. It doesn't help that different cabinet members hold different interpretations of his pronouncements, and some of his more ardent supporters have tried Putting on the Reich with no ounce of self-awareness, resulting in self-proclaimed "Duterte Youth" groups and branding all opposition as "yellow". note  Dilawan in Filipino, the color associated with the Aquinos since the EDSA Revolution in 1986. In addition, despite enjoying consistently high trust and approval ratings for the first 4 years of his term up to this point, he suffers from widespread condemnation abroad, due to being associated with drug-related killings. Satirical portrayals of him will often involve his signature Berserk Button and his methods with dealing with it, leading to the memes such as the image caption above.

Many, especially older folk, are also wary about his cozy relationship with the family of deceased President Ferdinand Marcos, the most controversial Philippine President ever due to his dictatorial regime, much of it under martial law, and its associated corruption and human rights scandals. Duterte's father had also been a Cabinet secretary under Marcos in his early pre-martial law years. Decades after Marcos was booted from power following the EDSA Revolution, his son Ferdinand Jr. aka "Bongbong" nearly won the Vice-Presidential race after gaining a following among the youth, and the Duterte-Marcos pairing got a lot of traction despite that they weren't running mates. Recently, Duterte pushed for the elder Marcos's burial at the National Heroes' Cemeterynote  Interestingly enough, he wasn't the first president to propose this. Upon Joseph Estrada's election in 1998, this was one of the first promises he made. After massive backlash, however, even Imelda Marcos backed down from the proposal. , which has divided the nation even more, considering the massive backlash when the Supreme Court voted 9-5 to allow the late Marcos to be buried in the Cemetery. This went Up to Eleven when he was actually buried there without notice, taking the media and most citizens by surprise.

Much later, the Islamic State-aligned Maute Group laid siege to the southern city of Marawi for five months before being driven out by the military. This has led to him issuing martial law on Mindanao (which has been continuously extended), something that hasn't gone without controversy owing to his similarities with the elder Marcos, person most associated with the term. And then there's a faction among his diehard supporters proposing a revolutionary government, note last invoked by Cory Aquino in 1986 ostensibly to allow him to make sweeping reforms and reform the 1987 Constitution, which has seen opposition even from the same side of the political fence.

In the middle of the Coronavirus Disease 2019 Pandemic, Duterte effectively ordered the closure of ABS-CBN, whose franchise expired despite almost a dozen bills renewing said franchise sitting in the Congress from the previous year. Furthermore, he has expedited the passage of the Anti-Terrorist Bill, which according to activists and human rights lawyers, may effectively criminalize dissent by giving the government the unilateral power to designated entities as terrorists.

His foreign policy, which so far consists of a major realignment away from treaty ally US (to the point of almost abrogating the Visiting Forces Agreement) and towards China and Russia, has also widely pissed off those who are concerned with China's actions over the South China Sea; this isn't surprising due to the country being the most pro-American in the world. Initially, Duterte declared the separation of military and economic ties with the US during a state visit to China, though he later stressed that by "separation" he merely meant that he would be perusing a more independent foreign policy. That said, he has warmed back up to the US a bit after the election of Donald Trump as US President, going as far as to congratulate the president-elect, something that has not gone without vocal thoughts from those on both sides of the Pacific.

As a result, the country's netizens are in virtual civil war over all this. Supporters view him as a Necessarily Evil Well-Intentioned Extremist who has to do what he has to do to relieve the country from systematic oppression after the lack of significant progress post-EDSA. Detractors meanwhile view him as at best He Who Fights Monsters with ends that do not justify the means, who is an insensitive proponent of/tool for whitewashing historical revisionism (as it was Marcos who sank the country into a rut before EDSA), and at worst merely just another Third World “Traditional” Politician (considering that Duterte was best known as an infamously vulgar provincial mayor before suddenly running for the highest national office) who is also an outright Lawful Evil Tin Pot Dictator in the making. His consistently high trust and approval ratings in surveys even as far as 4 years into his 6-year term (latest here

) may provide further insight on the majority perception of him.

Do note that virtually everyone in the country has strong opinions on the man, and given how polarizing he is, so Rule of Cautious Editing Judgment applies.

Duterte is referenced/appears in the following works: