Useful Notes / Rise of the Talkies 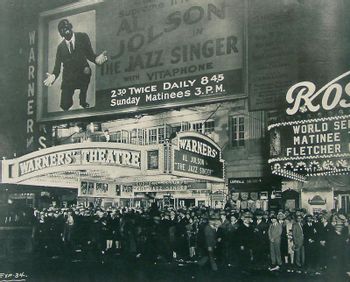 The glitz! The glamor! The blackface!
Advertisement:

The dawn of talking pictures is generally held to be the year 1927, with the release of The Jazz Singer, the first motion picture to have synchronized sound. Or so its reputation says — in reality, only a few minutes of the movie had synchronized vocals, with most of the rest being silent. It was no matter, though. The first completely all-talking full-length feature movie, Lights of New York, made in 8 days with a $23,000 budget, grossed over a million dollars, despite being hated by critics. Advances in technology combined with the success of The Jazz Singer meant that, by 1930, "talkies" had completely overtaken silent films.

This had several major effects on the entertainment industry. Vaudeville vanished virtually overnight, unable to compete with the talkies. Many former vaudeville actors and radio actors migrated to film to find work. Many silent film actors, including some of the biggest stars, saw their careers ruined by the rise of sound — some had bad voices or thick accents, others had trouble remembering their lines. Thousands of piano players who had played Background Music for silent movies also lost their jobs, unless they could compose film music or play piano on-set. Smaller studios that didn't have the money to switch to sound got left behind and went bankrupt, solidifying the power of the "Big Eight" Hollywood studios.

A further problem with the arrival of sound was that film craftsmanship actually took a step back. By the end of the silent era, films like Sunrise and The Crowd as well as comedies by Buster Keaton showed amazing technical facility in cutting, editing and camera techniques, benefiting greatly from the lightweight cameras that prevailed at the end of the 1920s. The arrival of sound and stage talent, as well as the primitive recording equipment, led many early films to be what Alfred Hitchcock once dismissed as "pictures of people talking" or filmed theatre with little in way of using camera techniques, lighting or background music to tell the story. Sound equipment also led to heavier cameras (most importantly, the soundproofing, known as a sound barney made them HUGE) which made it harder, for some time, to achieve the Tracking Shot and other impressive techniques. This helped make rear projection the standard way to film driving scenes.

In 1929, the Academy Awards were founded. The first few ceremonies honored movies from the previous two years. In the first ceremony, basically a dinner party with an award ceremony tacked on, Best Picture went to two films: The World War I romantic drama Wings and the dreamy arthouse romance film Sunrise: A Song of Two Humans. Whereas most encyclopedic sources list Wings as sole winner, Sunrise is better known today due to its critical acclaim and for being the Ur-Example, Trope Maker or Trope Codifier of many camera and special effects techniques common today, such as tracking shots. This first Academy Awards is often considered to be the last major hurrah for silent films before talkies took over almost completely.

Synchronized sound also made it possible to put The Musical on screen, and many singers and musical comedy actors followed Al Jolson into the medium of talking pictures. Some of them, including Eddie Cantor, Irene Dunne and Jeanette MacDonald, succeeded in becoming movie stars; many others ended up having to return to the stage after failing to repeat their stage successes on screen. As for established film stars, their fates in this era varied wildly: for instance, Charlie Chaplin was able to hold out with two major features before moving to full sound while Buster Keaton was eager to get into sound, but was prevented from doing so right away and eventually lost his artistic freedom until he was demoralized into alcoholism. Many actors lost their jobs for having too thick accents, while Greta Garbo proved fortunate enough that her Swedish accent fit her image.

A great wave of movie musicals swept the screen in 1929, and studios were already buying up publishing companies and hiring songwriters to write Movie Bonus Songs. By the end of 1930 however, the once-booming economy now was in ruins and the movie musical boom had faded, and nervous studio bosses were ordering movie musicals to be stripped of most of their song sequences.

Works set in Hollywood during this period include: