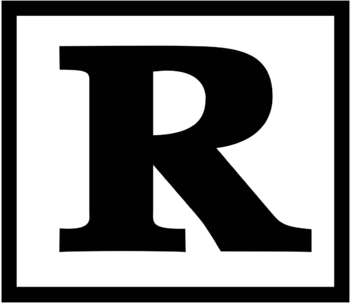 Why couldn't the 13-year-old and his sister watch the pirate movie? It was rated Arrrrrr!...no, really. It was rated R.

One of the age ratings of the Motion Picture Association of America. This rating is aimed at people who are at least seventeen years old and is known for restricted content, hence the name "Restricted".

It's the highest rating a film can go while still being shown at normal multiplex theaters, as most theater chains and theaters refuse to screen NC-17 movies. It is the film equivalent of Mature Rating.

Fun Fact: On the fiftieth anniversary of the MPAA, they revealed that more than half of all movies that were submitted to them were Rated R.

Films that have been given this rating:

Other rating systems' counterparts to this rating: