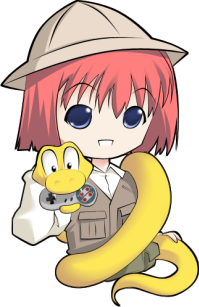 Visual Novel Engine is a free Game Maker software geared specifically towards developing Visual Novels, but flexible enough to accommodate games in any narrative-heavy genre. First released to public in 2004, Ren'Py has been in continuous development ever since, with the newest minor version being 8.0, available for Microsoft Windows, Linux, and macOS (it is also possible to make games for Android and iOS, but Ren'Py itself doesn't run in them). It has been used to power over 1,500 original games by both hobbyist and professional developers. The title rhymes with "pie" and is a portmanteau of "ren'ai" and "Python" — the programming language it was implemented in.

The core of a Ren'Py game is its script, wherein the developer defines the sequence in which it presents text, images, and sounds to the player. Most lines of this "code" correspond to a single line of spoken dialogue or exposition, so its structure is much more akin to a movie script than to actual programming code. Apart from the main bulk of text, the game script also defines following common objects:

Beyond these common features, game developers can use Python syntax natively in the game script to extend it with arbitrarily complex Game Mechanics, such as Stats and Skill Scores for Role-Playing and Simulation Games. Most commonly, Python support is used to implement simple if-then-else structures that dynamically branch the narration depending on the Event Flags that the player had set earlier.

While the entirety of the game content is up to the individual developer, the engine comes with a lot of built-in comfort features, like customizable main menu, saving and loading the game, rollback to previous game screens, fast-forwarding the text the player had already read, etc. A completed script can be then compiled into a finished game that runs on all supported target platforms.