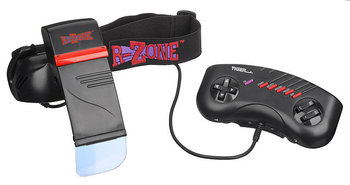 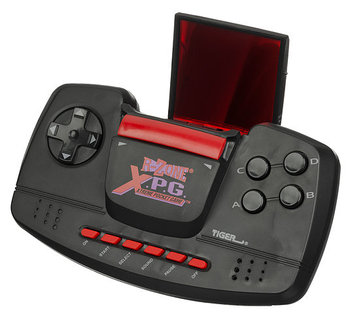 The R-Zone XPG
"Just when you thought the most sorry, pathetic excuse for a video game was the Tiger Wrist Games; Oh, no! Imagine playing one of [them]... up close to your eye... in red-and-black."
—The Angry Video Game Nerd
Advertisement:

The Tiger Electronics R-Zone is a mostly-forgotten portable game console released in 1995. It is best described as a Shoddy Knockoff Product of Nintendo's Virtual Boy, with absolutely everything that entails.

The original system, as seen on the page image, consisted of a controller with ten buttons (many of which were difficult to reach while playing) connected to a headpiece that showed the games' graphics directly in front of your eye. The problems started with the hardware itself; the R-Zone used LCD graphics that worked by projecting light through a screen in the game cartridges, which created a severe limitation on what sort of games could be made, turning it into a glorified Game & Watch, only with inferior, almost indistinguishable graphics using the beautiful color scheme of red-and-darker-red. As a result, while the system had several different licensed titles, including Batman Forever and Star Wars, and ports of Virtua Fighter, Panzer Dragoon, and Mortal Kombat, there was virtually no variation in gameplay from game to game.

Later versions of the system were released, including the Xtreme Pocket Game, or XPG (which didn't require the headpiece) and the Superscreen, which gave limited color graphics, while sacrificing almost any form of portability. Neither of these sold well enough to redeem the R-Zone, and it ended up dying an undistinguished death.

The Angry Video Game Nerd is on the record as saying the R-Zone is the absolute worst video game console he's ever played (at least until he reviewed the LJN Video Art machine, depending on whether a Shoddy Knockoff Product of MS Paint can be considered a console). So it has that going for it, at least.