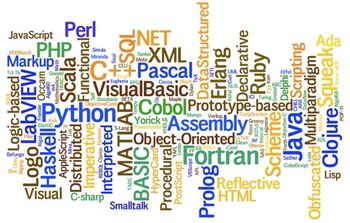 "C++ is a write-only language; one can write programs in C++, but I can't read any of them"
—Programmer joke

Computers, for the most part, are dumb. If you were to take computer hardware that was freshly built off the assembly line, put the components together into a fully assembled device, and tried to turn it on, it wouldn't do anything useful (if anything at all). Yes, Windows and macOS don't magically appear in the computer right from the factory. But if you give them something to do, they'll be able to do it really fast! But how do you tell a machine what to do? Here comes the programming language. As the name implies, it's the language you use to program the computer to do what you want.

While there are other languages in computer science, the defining characteristic of a programming language is that it's used to implement algorithms. Where it does this provides further distinction such as higher-level scripting languages. A computer language that's not a programming one is Markup Language, which only defines how something should look, but not what something should do.

A programming language has four basic elements to it:

Programs are written into source files, which can be compiled or assembled for later execution, or interpreted for execution right away. If there's something immediately wrong with the source file, the compiler, assembler, or interpreter will complain until it's fixed.

It should also be noted that a computer is more or less a Literal Genie. It's very, very rare a computer makes a mistake because it actually made a mistake. It "makes mistakes" because of how the program was written, which is entirely up to the human who wrote the code. However, the way someone writes code can make knowing how the program is supposed to function either easier or harder, so there's also an artistic side to programming.

At its heart, a computer is simply a giant calculator that computes arithmetic billions of times per second. All of its constituent parts, from memory to modem to monitor to mouse, has an alphanumerical address associated with it. The computer uses these addresses to route data throughout itself. Hence, the earliest computer languages evolved to reflect how computers fundamentally worked. An extraordinarily simple instruction might be "Take the number stored at memory address X and subtract it from the number stored at memory address Y, then send it to the printer located at hardware address Z". Low level languages use hardware-specific instructions to talk directly to the computer this way.

A programmer can write a low-level source code in two ways:

The reason for using low-level languages is for maximum performance and maximum flexibility. The code that's written is directly talking to hardware and the programmer has full access (barring specific security features) to the hardware. The trade-off is that it's very easy to write code that breaks the system in software and a lack of portability.

It's unusual these days to write assembly code by hand, because compilers have gotten so good at optimizing slightly higher-level languages like C. So languages are sometimes termed "low-level" because they give you a lot of control over how the assembly code turns out. In addition, many modern compilers actually allow programmers to create assembler "inserts" in the high-level source code. Some languages (such as Forth) are "multi-level" and allow both low-level and high-level coding to be done in the same syntax, and sometimes the same program.

High-level languages translate assembly code into something easily human-readable and automate the more mind-numbing parts. For example, you could write "x = 2" instead of "MOV x, 2"; or "for(5: Array)" instead of manually looping through instructions. However, this sacrifices performance and (arguably) flexibility because the computer must parse the instructions and translate them into machine code. More abstracted high-level languages go further, replacing, say, "x = 2" with "x is 2". Complex languages are written in earlier ones, "standing on the shoulders of giants"; a compiler is essentially a text parser that goes through source code for a given language and translates it into whatever lower-level language the compiler was written in. Along with readability, high-level languages also allow for "portability" as long as a compiler or interpreter exists for the platform.

Source files can be executed in three different ways:

Programming can be thought of as making a recipe for a dish. For instance, making a cake:

A quirk with different programming languages is that, like natural language, different "words" have different meanings, or no meaning at all. If you wanted to display something on your monitor, you may have to type out "Print", "Display" or even C++'s exotic sounding "cout" (for character output, and pronounced "see-out"). There are also different paradigms to how to structure code. For example, procedural programming involves breaking up tasks into subroutines to make things legible. Another one, object-oriented programming, groups variables and tasks into "objects". With so many different ways to write a program or routine, a programming language can be thought of as any natural language you may learn. Thus, it's important to practice it, if you want to get good at it.

about making a basic one.

. This measures popularity based on search engine results, so it may not line up with other definitions (e.g. there may be bias towards languages for which people currently need resources, rather than those being used for production code).

Languages made mostly for fun. Some of them are for testing the limits of a programmer.