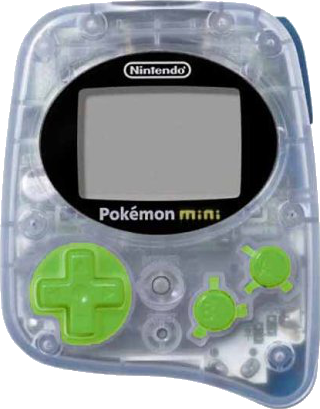 Not quite actual size.
It's no secret that by 2000, Pokémon was at the height of its popularity. So much so that Nintendo created the first (and only) game console dedicated to a single franchise in the form of the Pokémon mini. The console was released in 2001 and was Nintendo's smallest cartridge-based handheld to date. Despite its single color dot-matrix LCD screen, the system had revolutionary features for its time, including an infrared port, a shock detector, a real-time clock, and a vibrator to produce force feedback. The system lasted for about a year, edged out by the far fancier Game Boy Advance, but has gained a large homebrew fanbase.
Advertisement:

Pokémon Channel has an official Pokémon mini emulator in the game.