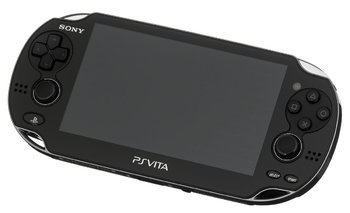 Short story: Sony Interactive Entertainment's successor to the PlayStation Portable turned the company's "successful failure" in the handheld gaming market into an outright financial failure. While the Vita struggled to cultivate a user base outside of its domestic Asia and became the company's lowest-selling system, the device managed to perform well enough in its home country thanks to Japan's growing preference for handheld gaming over home consoles. Despite the bad luck the Vita suffered, the handheld developed a small yet passionate cult following with smaller Asian studios and Western Indie Game makers still developing games for the system long after Sony gave up on the system, along with modders finding exploits to make the most out of the Vita's hardware.

Long story: Debuting at the beginning of 2011 in a private press conference by Sony under the name "Next Generation Portable" (or "NGP"), and bestowed with the official name of PlayStation Vita at E3 2011, pre-release reactions to Sony's newest handheld eerily mirrored those of its predecessor. Just as the PSP before it, gaming media proclaimed the Vita to be the Nintendo Killer. In light of the Nintendo 3DS's rocky start, combined with the multimedia capabilities the Vita provided and the substantial power gap between the two, Sony's handheld was once again seen as the obvious consumer buy

So naturally, when it was released in Japan on December 17th, 2011, it performed well for its debut week... before losing almost 80% of its sales numbers the next, being outsold on Christmas week not just by its main competitionnote at one point, the Nintendo 3DS was outselling it by 47:1, but by the original PSP as well. Sales also proved nonexistent following its launches in North America and Europe, with the PlayStation Vita selling only 4 million units globally by the end of its first year. The company would stop publicly revealing the sales numbers for the device due to its underwhelming performance after two years on market, instead giving combined figures for both the PSP and Vita, with even those sales projections routinely falling short. While a price cut a few months into the system's lifenote from 24,980 yen to 19,980 yen allowed the Japanese sales to recover and establish the system as a modest seller in its home country, all attempts to fix the trend fell flat overseas. For details concerning all of this, see the analysis page.

By the end of 2013, Sony decided to shift focus with the PlayStation Vita, pushing it as a companion system to the PlayStation 4, with a firmware update allowing PS4 games to be playable on the PS Vita via Remote Play over a wireless network. This had the unfortunate effect of making the device even less desirable to consumers, as Sony was now painting the Vita as a US$200 game controller in the vein of the Wii U's Gamepad rather than a distinct gaming platform with its own library of titles. At this point, many developers outside of Japanese studios and Western indie creators had all but ceased creating games for the platform due to low sales. Sony themselves would cease development and publication of first-party content in 2015, in addition to porting the handheld's most noteworthy exclusives (such as Gravity Rush and Tearaway) to the home console, further reducing the value proposition of buying a Vita as the system's life dragged on. Production of physical game cartridges ceased in May 2018, while production of the Vita itself would end the following year in February.

Despite all this, the Vita still managed to develop a small but devoted fanbase in non-Asian markets, remaining relevant to that audience thanks to its solid library of Eastern RPGs and Visual Novels and aforementioned PS4 companion features. Regardless, the system's lack of global success meant the company currently has no plans for a successor, with various Sony executives stating that they see no future for dedicated gaming portables and the PlayStation 5 cutting out Vita support for Remote Play, though there remain unspecified plans to remain in the mobile market.

Following the footsteps of the PS2 and early versions of the PS3, the Vita is backwards compatible with PSP games and emulated PlayStation games released for the PSP, though only through downloadable games purchased from the PSN since the Vita lacks a UMD drive. The Vita has a battery life of 2-5 hours depending on the system's settings. Sony also produced a second Vita design (model PCH-2000) in 2013 that was both 20% thinner and 15% lighter, came in several colours, had 1GB of internal storage for small games and media, and replaced the OLED with an LED screen.

Sony also released a home version of the device called the PS Vita TV in Japan on November 14th, 2013. A "microconsole", the Vita TV was a HDMI device that could play PS Vita and PlayStation Plus games on the television with the use of a DualShock controller, as well as stream PS4 games onto a different television through Wi-Fi. The device's primary purpose was to form a foothold for Sony in the multi-function streaming device (Apple TV, Roku Box, etc.) market in the Eastern markets, where living room streaming admittedly had less of a foothold. Sadly, a fair chunk of Vita games are actually incompatible with itnote Seemingly mostly due to a combination of licensing difficulty (technically, having to re-license a portable video game as a home title is a legal hassle), incompatible controls (the PSTV lacks the camera and microphone from the Vita, its touchscreen emulation is imperfect, and for some unknown reason, the native motion controls on the PS4 haven't been used yet to emulate those of the Vita) and outright laziness by the dev teams. This CAN be circumvented easily enough by the "DolcePolce" homebrew plugin which makes the PSTV ignore Sony's game blacklist, but it obviously doesn't allow the aforementioned controls to be used. Note that some hacks permitted by Henkaku allow spoofing of certain functions not natively possible on the PSTV, e.g. faking a camera signal., though a large collection of PS1/PSN games are downloadable and compatible with it. Due to low sales, it was renamed PlayStation TV when it was released in North America and Japan the following year, to avoid association with the Vita brand.

Compared to the PS3 and PSP, the hacking/homebrew scene for the Vita family was limited and made slow progress for years due to the locked-down nature of the hardware and software. This all changed in July 2016, as the firmware v3.60 and 3.65-exclusive Henkaku system hack finally allowed unsigned code to be run freely and is very simple to install straight from the internet browser, and the h-encore exploit was later developed to permit the downgrading of Vita firmware down to v3.60. The Vita's homebrew scene consequently blossomed to surpass that of the PSP by the beginning of The New '20s, with too many notable developments to name on this page.

All in all, with Sony abandoning official support for the Vita (going up to attempting to close the platform's online store on August 27, 2021, which was reversed on April 19 following a big blowback from the handheld's cult following), the homebrew scene is thriving and breathing new life into the scene alongside developers who are still making official games for the console.

Vita games and video game series with their own TV Tropes pages: