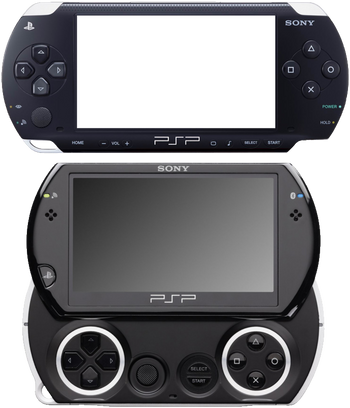 Short story: You wouldn't be wrong in christening the PlayStation Portable (aka the PSP) as a "successful failure." It failed in the sense that it did not enable Sony to achieve their goal of stealing the handheld market from Nintendo who, in turn, went on to achieve dominance in the handheld space for the third time in a row. But it was a success, in that it still sold tens of millions of systems (selling nearly 80% as many systems as the PlayStation). It was the closest anyone had ever come to presenting legitimate competition for Nintendo's handhelds, and it featured a number of hit games — particularly in Japan, where a few Killer Apps led to the system getting a second lease of life in the latter half of its release cycle and becoming, at least locally, a real competitor for the Nintendo DS.

Long story: in 2004, Sony was riding high off the success of the PlayStation and the ludicrous sales numbers the PlayStation 2 bought themnote Both of which put Sony on the top of two Console Wars. The PS1 shocked the console world upon its dethronement of Nintendo during the 5th console generation, and the PS2 outspoke the charming-yet-underperforming Nintendo GameCube, murdered the out-of-luck Sega Dreamcast, and held its own against the new kid on the block, the Xbox. Both PlayStation systems would go on to sell out all their competitors in each generation combined by more than two to one., and decided to get into the handheld market, confident they could replicate that level of success in this new arena. The gaming press were just as confident. It seemed like all the factors were in place for it to happen. Sony's use of their proprietary, high-capacitynote Upwards of 1.8 gigabytes of space if the disc was dual-layered Universal Media Discs (UMDs) versus Nintendo's reliance on low-capacity cartridges for the DS; a more traditional, two-handed control scheme not dissimilar to that of a pre-DualShock PlayStation Controller, versus the DS's unconventional, often-stylus-and-button-centric inputs; several third-party developers onboard versus Nintendo's largely skeleton-cast show; multimedia capabilities such as movies, television shows and music stored on UMD coupled with digital downloads through USB Mini connectivity; PlayStation Network support following the launch of the PlayStation 3, allowing for ad-hoc play to the larger system, access to the PlayStation Store, and far greater processing power (which wasn't the case with the two console systems, but still a touted factor) all contributed to the notion that success was written in the sky. It seemed like the PSP could become the leader in the handheld gaming market, and finally place itself upon a throne once held strong by Nintendo.

As expected, not everything went as planned. Among the reasons for this include:

Despite these issues, the PSP still saw financial success during its lifespan. As mentioned, it's easily the most successful competitor to Nintendo's handheld dominance and one of the highest-selling second-place systems of any console war. The final sales tally is believed to be somewhere around 80-82 million units, which potentially puts it slightly above the Game Boy Advance's 81.51 million. Impressive considering that the PSP was Sony's debut into a market that Nintendo effectively owned.

Firmware updates since its launch would increase the system's capabilities, ranging from being able to play more file formats, to being able to organize media in folders, to PS3 remote play compatibility. In addition to this, later released UMD titles allowed portions of the game to be installed to the memory stick, reducing loading times and extending battery life.

However, in some countries, namely developing markets such as Morocco, the Philippines and India, the PSP was and still is the most successful handheld gaming device, where the absence of Pro Evolution Soccer and a 3D Grand Theft Auto title didn't allow for the DS, and subsequently the Nintendo 3DS, to thrive. Additionally, the relative ease of using Custom Firmware (see below) allowed small shops to make a business of installing downloaded games into the PSP for a small price (about £0.50 or $0.70 each per game).

Moreover, as has been mentioned above, around the time that the system's success was slowing down in other developed nations, in Japan, the system experienced a full-bloom renaissance, initially spearheaded by one specific game: Monster Hunter Portable/Freedom in 2005. The enhanced port of Monster Hunter G for the PS2 added local multiplayer, which proved to be the real missing element that Monster Hunter needed to become a legitimate social phenomenon, and future sales of the PSP would be heavily driven by Monster Hunter and its sequels. Once the system began establishing a real userbase, other developers took note and developed for it as well, because MHP had inadvertently proven something else: PSP development was rather similar to PS2 development in cost and labor scope. Many mid-size dev studios, or publishers with mid-size development houses attached, had been very hesitant to develop for the then-upcoming PS3 because of the ballooning costs for HD development in the mid and late Noughts. The PSP, with MHP as a proof-of-concept, proved to be an ideal platform for developers who knew and could handle a PS2-like workload and wanted to make a game more complicated than what the DS could handle but didn't want to commit to HD development costs. As a result, Japanese software development for the PSP exploded in the wake of Monster Hunter Portable, and its software list from the latter half of its life cycle — 2007 or so onward — is a who's-who of some of the greatest games of the entire Seventh Console Generation.

During its heyday, the PSP was also notable for a massive hacking and homebrew community. Custom firmware was easily installed as early as Japan's launch model and opened a multitude of new ways to use the system's advanced hardware, from running various emulators (up to the Game Boy Advance and PS1), browsing YouTube videos, reading eBooks, and even using a console as an IR Remote. A modified PSP was one of the most versatile and powerful portable devices of its time, long before modern smartphones entered the market. However, the scope and prominence of the hacking scene likely influenced Sony's decision to use proprietary memory cards for its successor, the Vita.

Like many handhelds and Sony consoles, the PSP underwent several revisions over the years. The major one was the PSP Slim (or PSP-2000) in 2007, which slimmed the body, reduced the weight, simplified the UMD drive, introduced USB charging, and included a brighter LCD screen and a video out port that allowed it to play on TVs. In 2008 the minor Slim & Lite revision (or PSP-3000) came along with a better LCD screen, a microphone and the ability to output component videonote The main giveaway between the 2000 and 3000 is that the latter has pill-shaped buttons under the screen and a thinner ring on the UMD drive. It also has the word Sony on the left side, as the PS logo was moved to the Home Button. Finally, in 2011 Sony announced the PSP Street, a budget PSP that has a simple plastic finish, lacks a microphone and has mono speakers and a very simplified bottom button row. Interestingly, the Street's UMD drive opens up the entire back shell of the device, rather than just where the UMD goes. It also has no Wi-Fi, meaning it cannot connect to the internet. This meant no PlayStation Network, no PlayStation Store, Digital Comics, Downloadable Music, TV Shows, Films, Games, and no means to play any of the aforementioned unless you had a UMD.

That exception aside, the PSP is capable of downloading retail titles available for it through Sony's online storefront, as well as smaller games, video and Downloadable Content for existing games. Furthermore, a special incarnation of the PSP, 2009's PSP Go, was specifically built around digital distribution, having no support for the UMD medium. Despite fears from older PSP owners, Sony insisted that the Go was never meant to replace the PSP. Response was lackluster at best, with reports that some stores wouldn't even stock it. note One of the major US video-game-only retailers, GameStop/EB Games, makes a good portion of their money from reselling used games, and was naturally unimpressed with the system for this reason. Although they grudgingly sold the console in the end, they did not promote it. Up until the release of the Xbox One All-Digital Edition ten years later, the Go was the only console revision by the big three to be digital only, home or handheld. Many gamers and brick-and-mortar retailers hope it stays that way, for various reasons.note Interestingly, the PSP Go would use the Vita's proprietary connection cable and use a rather limiting memory stick format, issues the Vita would later be criticized for.

Since the PSP was released in 2004, and Sony historically released new consoles every six years, by 2010 there was a storm of rumor and speculation over what would come next. The announcement didn't hit until January 27, 2011. Sony's new device, named the Playstation Vita, was released later that year. The Vita officially allows any PSP games sold on the PSN store to be played, along with PS1 and Mini games. Notably, the Henkaku system hack and Adrenaline custom firmware program allows the entire PSP operating system to be directly emulated on the Vita, enabling total PSP backwards compatibility on the Vita with all PSP hacks and other goodness conferred by this original environment available.

On July 2, 2021, the PlayStation Store for the PSP was officially shut down. While the server sunset was originally intended for the PSP, PS3 and PS Vita collectively, fan backlash caused Sony to keep the latter two's storefronts up, with only the PSP store getting taken down due to lack of demand for it. This allegedly rendered around 120 PSP-exclusive digital titles

no longer obtainable in any legal capacity, although the storefront's purchases list is still accessible for those who bought any of these titles.