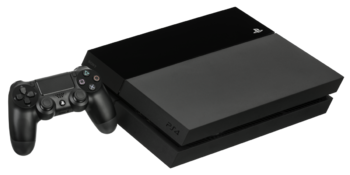 Previously, Sony developed their own, highly custom chips for use in their consoles. However, developers complained that these chips were hard to program for due to poor documentation and complicated designs. While devs learned to deal with the PS2 because the console was the clear market leader, the PS3 was not the leader for most of its generation and caused a lot of headaches that negatively affected many Multi-Platform games on the system. Additionally, none of these processors went beyond the PlayStation application as Sony had hoped, which not only contributed to the steep learning curve of programming them, but also made it harder for Sony to recoup the huge amounts of money they spent developing them in the first place. The Cell processor in the PlayStation 3, for instance, failed to break into the supercomputer market despite various attempts.

As a result, Sony asked what the developers wanted in their new system. This led to AMD's Jaguar platform being selected, along with 8GB of very fast GDDR5 memory. Each has its own advantages: AMD's platform uses the x86-64 architecture that powers most PCs. Since x86-64 is a popular, long-running architecture (debuted in 2003, with x86 itself debuting in 1978), there's plenty of developer experience with it. Meanwhile, 8GB of GDDR5 deals with issues of both the size and speed of memory budgets, a constant bane to video game programmers.

For the first time since 1998, the DualShock controller also received an overhaul. The DualShock 4 is more ergonomic, with slightly bulbous handles and concave triggers and thumb sticks. The "Start" and "Select" button were replaced with an "Options" button for game menus and a "Share" button to access sharing features. A clickable touch pad and speaker were added to the middle of the unit. The bottom of the controller features a headphone jack for voice chat or full audio. Lastly, the controller features a light bar on the top, similar to the PlayStation Move's scepter for move support or general status / mood indications / Color-Coded Multiplayer depending on the game.

The console is region free, and launched without the online DRM that Microsoft planned to implement for Xbox One in 2013 (which Sony used to mock in their troll ad a while after the announcement

). While game installs are mandatory, PS4 supports an "install as you play" feature on digital and retail games. As with the PlayStation 3, the hard drive is user replaceable. A PlayStation Vita remote play feature adds similar functionality as the Wii U's tablet controller, which was later extended to Android devices via an App

Support for VR head-mounted displays such as Sony's Project Morpheus and Oculus Rift was in development. Eventually Sony's own Project Morpheus was chosen and it was rechristened PlayStation VR, and given an official launch date of October 13, 2016. The platform is notable for being targeted as a more accessible VR system than its competitors the Oculus Rift and the HTC Vive, being initially priced at $399 and later dropping to $299 (and neglecting the need for a powerful PC which the other two require). It also lacks a requirement for numerous sensors (which, for better or worse, results in no room-scale tracking), instead only asking that the user has a PS4 Camera device in addition to the controller of their preference. A minor revision of the hardware came out later (see technical specifications for details) and the units been confirmed to be part of the backward compatability setup for the PS5.

Unlike the PlayStation 3, which didn't produce a net profit until 2011, nearly five years into its lifespan, Sony broke even on PS4 at launch through the sale of online subscriptions, accessories, and games. Sony sold 4.2 million units by January 1, 2014, and 6 million by March 3, 2014, making it the second fastest-selling console of all time. (The fastest is its successor, the PlayStation 5.) In fact, due to Sony's external financial troubles in their other fields, the excellent sales on the platform were responsible for serving as the only area where the company made a profit in 2015. By 2021 it ended up as the most successful PlayStation console in terms of software sales with 1.577 billion game units sold, barely scraping by the PlayStation 2 and its 1.537 billion game units.

In March 2016, Sony announced a refresh of the PlayStation 4 hardware, later revealed on September 7, 2016, to be comprised of not one but two refreshed systems. One of them was a size-reduced version of the original console called the PS4 Slim, which was heavily leaked days before the announcement, and the other one was a larger unit with better hardware called the PS4 Pro, which was made with 4K TVs in mind. Both consoles were released in November, replacing the original PS4.

that the PlayStation 4 is "Entering the final phase of its life cycle", and that focus would now shift to providing a better online experience to users. This was followed shortly after by a cryptic tweet from SCEE mentioning March 2021, and shortly after a bug report filed with AMD regarding the unit running Ryzen architecture by SCEE engineers was leaked into the web. In an April 2019 Wired article, Sony executive Mark Cerny confirmed

that the company was working on a successor unit, later identified

as the PlayStation 5. Although Sony intended to quickly phase out the PlayStation 4 to focus on the PlayStation 5, they were forced to continue development for both systems simultaneously due to the stock shortages and limited install base of the latter thanks to rampant scalping. Unfortunately, in 2021, the PS4's DRM was cracked wide open, and soon there was reports that PS4s were being used to mine cryptocurrency in Ukraine. While Ukrainian police later clarified that the outfit was actually mining FIFA loot boxes, the damage had been done and scalpers in certain areas started targeting the PS4 as well, creating yet another shortage.

As of 2022, support for the PS4 is alive and well despite its successor being out for two years. This is due to the scarcity of the PS5 but everyone already having a PS4, but also due to the fact that the PS4 Pro was able to bridge the hardware power gap between the previous generation and the next generation and the PS5's backwards compatibility with the PS4. It's not uncommon to see lower-profile releases come to the PS4 but not have a dedicated PS5 version.

Towards the end of the console's life, Sony Computer South Korea went forward with a hilarious ad

called Plash Speed, where a husband buying a PS4 Pro tries to hide the fact from his strict but noticeably IT-ignorant wife by trying to pass it off as a replacement router (calling it the titular Plash Speed). The ad went viral and became a meme very quickly in Asia. In a funny coincidence, the PS5's design when it was unveiled would be compared to that of a router.