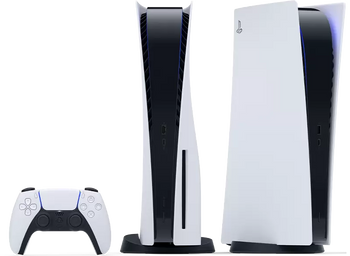 The PlayStation 5 is Sony's entry into The Ninth Generation of Console Video Games. It was released on November 12th 2020 in the United States, Canada, Mexico, Japan, Australia, New Zealand, and South Korea; it was released November 19th everywhere else.

On top of improved CPU, GPU and memory compared to the PlayStation 4, the system introduces a new NVMe solid state drive and PCIe lane solution that provides streaming of data of up to 5.5GB/s raw and on average 9GB/s compressed. In layman's terms, this means developers can easily sidestep the Loads and Loads of Loading that had been a constant bane of many console games ever since the switch to disc-based media in the mid-90s.

In addition, the system's hardware allows for a theoretical max resolution of 8K, though few games actually render in this resolution due to it being too taxing on the hardware in a practical scenario. Most games opt for 4K instead, or sometimes 1440p upscaled to 4K. It, along with the Xbox Series X, is also one of the first video game consoles to support ray-tracing. HDR support is carried over from the PS4 Pro.

The system supports software level PlayStation 4 emulation as well, to allow for backwards compatibility with almost the entirety of the PS4 librarynote Only ten full PS4 games aren't playable on PS5: DWVR, Afro Samurai 2: Revenge of Kuma: Volume One, TT Isle of Man - Ride on the Edge 2, Just Deal With It!, Shadow Complex Remastered, Robinson: The Journey, We Sing, Hitman Go: Definitive Edition, Shadwen, and Joe's Diner. Most PS4 betas and demos are also unplayable, including the infamous P.T. by the explicit request of Konami.. By extension, the system is also able to run the PS4's emulators for the original PlayStation and the PlayStation 2, though it is only able to play the digital versions of PS1 and PS2 games released on the PlayStation Store. Many PS4 games receive slight upgrades in certain areas when played on PS5 due to the console's stronger hardware (i.e. faster load times, more stable framerates), with the possibility to receive more dramatic improvements via dedicated "next gen" patches.

The system's early life was plagued by shortages. While not entirely unheard of in the console market — the Wii and PlayStation 2 famously had similar issues — the problem was exacerbated by the COVID-19 Pandemic. The pandemic created extremely high demand and low stock due to supply chain issues and a semiconductor shortage, and scalpers took advantage of the situation to buy up what little stock was available. Getting a PS5 early on in its life without going through a scalper and murdering your wallet was extremely difficult. Sony tried to alleviate this by creating a program where PlayStation account holders are randomly invited to purchase a console from Sony's online storefront, but even that didn't guarantee a console since they would send out more invites than how many systems they had in stock (and in some cases, these invites went to people who already owned a PS5). While it managed to become the fastest-selling console in U.S. history despite these shortages — 10 million units sold in 8 months and it broke the record set by the PS4 — it would end up falling behind the PS4's sales trends due to the inability to manufacture enough units. Sony was forced to lower their projections as a result. The PS5 remains extremely rare in many countries as of 2022, with rumors abound that Sony has cut off supply to regions it sees as less lucrative (i.e. countries with less buying power) in order to keep the limited supply flowing to important markets like North America. And even in some high-priority markets like Japan, the console still had to be purchased through a lottery.

The shortages forced Sony to support cross-gen game releases despite claiming they would quickly move on from the PS4 after the PS5's launch. While first-party PlayStation 3 games had been quickly abandoned after the immediate success of the PS4, PS4 versions of PS5 games from Sony's own developers would continue to be released over 2 years into the PS5's life. Some third-party devs would even release PS4 games without bothering to make PS5 versions. This is due to the combination of the PS5's backwards compatibility with its predecessor, the prevalence of the widely successfully PS4, the existence of the PS4 Pro, which shares some hardware features — like 4K and HDR — with the PS5note The PS5 will automatically boot PS4 games into Pro mode if available, and every PS4 game released after the Pro model was required to take advantage of the new hardware., and the fact that there is a supply shortage of PS5 consoles.