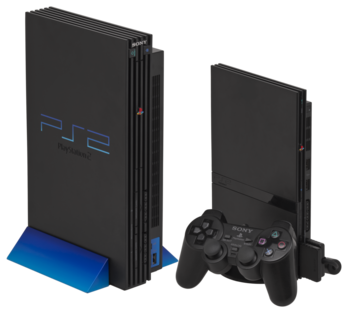 The second generation of Sony's PlayStation console, and Sony's entry in The Sixth Generation of Console Video Games, which continued Sony's lead as the top console maker. Instead of the ordinary gray color scheme and top-loading CD drive of the original, the PS2 featured a sleek black body, a front-loading disc tray, an optional vertical stand, and a much more substantial cooling system.

One of the system's biggest features was its use of the emerging DVD format.note PS2 games made use of both the CD and the DVD format, which were Color-Coded for Your Convenience: CD-based games had blue backings (compared to the black CDs used for PS1 games) and DVD-based games were silver. While DVDs were first commercially available in 1996, when the PS2 launched in 2000 the world was still in the process of transitioning to it from VHS as the home media standard. The PS2 worked as a DVD player right out of the box — an incredibly affordable one for its time, and that was before taking into account the fact it was a game system. This, coupled with near-complete backwards compatibility with the original PlayStation, made the PS2 an extremely attractive system for both players and developers (the system was actually the hardest of its generation to develop for, but offset that by also being the most commercially enticing platform). What certainly didn't hurt was that it was the most powerful gaming console on Earth at the time of its release (or at least the most powerful gaming console people cared about; the Nintendo GameCube, released a year later, was more powerful than the PS2 but set back by its use of a lower-capacity storage format) and one of the first to truly compete with the processing power of PCs, which helped to generate a ton of excitement on its own, especially for those too young or too technophobic to understand the significance of the DVD format and just cared about gaming. The machine had the highest consumer anticipation in the history of video games at the time — its mere announcement two whole years before release was one of the causes of the Sega Dreamcast's death (and by proxy, the end of Sega's console business) in its infancy.