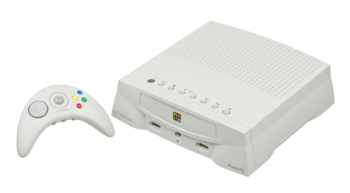 The Japanese model of the Pipin; American models were black and carried the "@WORLD" nametag instead of "Atmark".

The Pippin was an attempt by Apple in the mid-1990s to create a low-cost computer for playing multimedia CDs and browsing the Internet. It was a severely stripped-down Macintosh with TV-compatible video output which Apple intended to be manufactured by third parties, and Bandai chose it as a way to (re-)enter the game console market.

Its hardware specifications, while theoretically better than that of contemporary consoles of the era, was too weak to run the normal Mac software of the day. Although it was never Apple's intent - like the Amiga CDTV and CD32, the intent was to boot a special cut down version of Mac OS, which then loaded up an optimized version of the game on the CD-ROM. However, in practice, the developers of the games often used the same executable as the one released for Mac desktops instead, which meant they didn't run well. What certainly didn't help is that the console lacked a discrete graphics and sound processor, meaning the CPU had to do all of the heavy lifting, in addition to calculating game logic. It had decent amount of RAM when compared to other consoles of the era, but due to the use of Mac OS as it's operating system, the system was very short of RAM after the OS booted (RAM can be upgraded, but the upgrades were proprietary and came at a premium). Additionally, it lacked any storage whatsoever, except for a tiny 128K Flash chip mainly used for system settings. Apple released a floppy drive (as well as a Magnetic-Optical drive, and later a SCSI interface accessory for hard drives and Zip disks) for it, but in typical Apple fashion they charged a hefty extra for the accessories, which put off many gamers, who scoffed at the idea of buying a pricey extra piece of hardware just to save their games.

Unsurprisingly, due to the high cost of ownership, it bombed, with just 42,000 units sold. The fact that it was seen and marketed mainly as a console and not a computer put it into a bad spot. The $599 pricetag, more suitable for an entry-level PC, was just too expensive for the console market. Remember the outrage that the same price for the PlayStation 3 caused in 2006? Ten years before it was even worse: 1996's $600 corresponded to 2006's $800, if corrected for inflation. Furthermore, after a RAM upgrade and a floppy drive, both needed to bring the Pippin up to a usable level, the final cost of ownership could easily reach over a thousand dollars, making it just too expensive for its intended market.

The Pippin has a 50-pin connector on it's underside, called the "X-PCI" connector. This connector is used to connect the Pippin to "docking stations", of which several types were made:

One downside with the design was that it was not possible to "stack" docks, meaning that you cannot use a PCI card dock together with a Floppy disk dock and so on.

Additionally, the following accessories exist for the Pippin's AppleJack connectors:

The Pippin can use any serial port modem that is compatible with Apple's GeoPort modem instruction set, and in fact ships with one in the box.

Like the Amiga CDTV/CD32, the Pippin was capable of running software written for their desktop counterparts. However, due to the low processing power of the consoles, as well as the lack of RAM unless the user has purchased an upgrade, apps had to be optimized (Apple calls this process "pippinize") or they may perform poorly. The reverse however require no optimization, a game optimized for the Pippin will run without issues on a regular Macintosh.

The Pippin uses a specialized version of the Mac Toolbox firmware called KINKA. There are several versions of KINKA, the most common version being 1.0 for Japan and 1.2 for US, the Katz Media Pippins has version 1.3, and are the rarest as Katz Media Pippins are never sold to consumers, only in bulk to special establishments. Unlike common desktop Macs, the firmware is not user-upgradeable.

KINKA will load a special signed and cut-down version of classic Mac OS from the CD-ROM itself once self test is complete, no OS is preinstalled on the console. Homebrewers have gotten as far as getting Mac OS 8 hacked to run on the console.