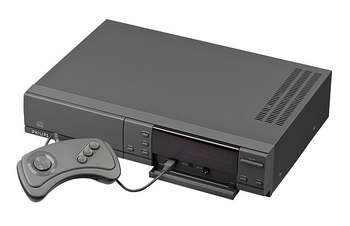 The Phillips CD-i 220
"Look how huge it is! It looks like one of those old VCRs. It is the biggest video game console I've ever seen. Literally, you can fit two of these inside it. [the Nerd stacks the smaller CD-i console on top of the giant one] If you remember my Atari 5200 video where I commented how big it was, [cut to the CD-i and the Atari 5200 side-by-side] well, both consoles are ridiculously huge, but the CD-i just barely wins."
— The Angry Video Game Nerd
Advertisement:

The CD-i (short for Compact Disc Interactive) was an attempt by Philips to create a multimedia CD player standard, released in 1991. Development was originally started in 1986 by Philips in cooperation with Sony. As multimedia functionality for the Compact Disc format was still in an early and experimental state, Philips decided to design their own standard for multi-purpose, multi-media discs: carrying over the player's "Compact Disc Interactive" name, the CD-i format was defined by what became known as the Green Book Standard. CD-i discs were capable of providing both pre-recorded videos and interactive software on a Compact Disc, acting as a prototype to both the Video CD format and the more widely popular CD-ROM format (despite being designed and debuting after the latter).

The idea behind the CD-i was immensely ambitious, with Philips aiming to create an all-in-one device and format that could combine a home computer, video player, audio player, and interactive software device into one unit. The CD-i was even able to access the internet, albeit only in Britain, via the CD-Online service (which remained in operation from its 1995 debut all the way until 2000). In hindsight, the idea seems rather prescient in light of the emergence of smartphones during the 21st century and their ability to fulfil this same "all-in-one" niche to a far more effective degree; the only things the CD-i couldn't do, by comparison, was make phone calls and send text messages.

Since the system was barely aimed at traditional gamers, its library mostly consisted of educational titles, reference works, and board games like Clue or Axis & Allies. Philips tried to capitalize on its gaming capabilities when the edutainment titles failed to sell, but the arrival of more powerful systems, like Sony's PlayStation, the Sega Saturn and the Nintendo 64, made the change of direction too little, too late. The format did find some success as a kiosk application and remained in production up until 1998; where game-focused multimedia systems such as the 3DO were eventually made obsolete by more powerful dedicated game consoles, the CD-i was the only one to cover the electronic self-help niche.

Like the aforementioned 3DO, the CD-i was conceived as a standard and thus several manufacturers produced their own versions, like Magnavox (though by this time, Magnavox was owned by Philips, so their version was essentially a badge-engineered version) and Sony. However, Philips was adamant on maintaining that every player and every disc be compatible with one another, which directly blocked any and all attempts at expanding the system's capabilities or streamlining its complex hardware due to the fact that it could've opened the doors for developers creating software only compatible with more powerful variants. While the notion of universal compatibility seemed altruistic to consumers on paper, it ultimately did more harm than good, causing the system's capabilities to stagnate almost immediately and preventing it from ever being able to hold its own against advancing hardware in the seven years between its debut and discontinuation. To give a point of reference as to how badly it was beat out by other video game systems, the Sega Dreamcast debuted the same year as the CD-i's discontinuation.

The system is best known today for its four Nintendo-licensed games (The Legend of Zelda CD-i Games and Hotel Mario), the result of a deal between Philips and Nintendo for a cancelled SNES CD-ROM add-on. Their Deranged Animation cutscenes are a popular source of YouTube Poop, lending them Watch It for the Meme status.

Today, the CD-i's reputation is formed entirely off of its middling-at-best video game titles, with its broader goals and better capabilities generally only being known by the most diehard of retro tech enthusiasts. The fact that the CD-i is still notoriously difficult to emulate also hampers attempts at getting it Vindicated by History, as it means that the only way to actually experience what the system is capable of firsthand is to go out and buy an actual unit... which introduces more problems given the system's high price point and the declining reliability of its hardware as the decades go on. At the very least, the popularity of the Mario and Zelda CD-i titles among YouTube Poop creators will ensure that the device maintains at least some degree of long-term legacy. For better or for worse.