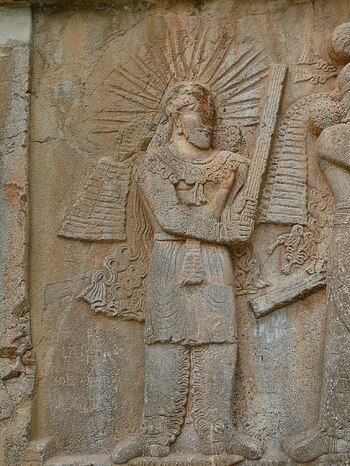 Parthian and Sassanid empire depictions of the Mithraism cult.
Advertisement:

With a history spanning more than 26 centuries, Iran has developed an interesting platter of folklore and mythology. Just like the nation's history, Iranian mythology can be divided into two parts: Pre-Islamic and Post-Islamic. Persian mythology stands for all Iranic mythology in all Iranic languages, which are plenty. However, the Persian language has the strongest influence in the Iranian plateau, as it is spoken in three countries and a second language to all ethnic minorities in the plateau. Hence almost all works of Persian mythology have been collected by various writers and poets through the ages in the Persian language, rather than their native Iranic language. Well advised would be to read about the ancient Egyptians, Hebrews, Mesopotamians, Arabs and Hittites, decidedly since the ancient Persians and they are civilizations that appeared and interacted with each other in the Middle East, and the Scythians, who were another Iranian civilization that interacted with the ancient Persians.

Pre-Islamic Persian mythology dates back to early Proto-Indo-European groups, with plenty of similarities between Persian mythology and other Indo-European folklore. See also Scythian Mythology, which may be comparatively more "basal" in this regard (and seems to have strongly influenced the Persians due to the conflict between the two iranian cultures).

The holy book of Zoroastrianism (which is actually called Mazdisna in Persian), Avesta, is the primary source for early Persian mythology. However, the main contributors in collecting Persian mythology were Parthian and Sassanid monks, who, using the latest invention of paper, wrote down all there was in books called "Kwaday-Namag/Khodaynaame". Khodaynaames included tales of the known and unknown, and various religious beliefs told through eyes of Zoroastrian monks who favored politics of the story rather than the story itself.

350 years later Islam swept away Zoroastrianism and due to the influence of Arabic rulers, the Persian language was reduced to a second language. A Parthian poet by the name of Ferdowsi collected everything he could find in the Khodaynaames and saved it in the form of The Shahnameh a.k.a. The Book of Kings, a compendium of Iran's legendry and history told as a verse epic. The reason he chose this title was that people at the time didn't want to say the Lord's name (khoda) in vain, as opposed to the Sassanid rulers who called themselves "Khoda" or God (Shah still means king in Persian today).

The main difference between Shahname and various Khodaynaames is the point of view. Ferdowsi used a lot of alternative sources which told the stories a bit differently. For example, in Shahname, Garshasp is an evil ruler because he spread Zoroastrianism by the sword; in the Khodaynaames, Garshasp is a holy ruler for the exact same thing.

Another book that collected Persian folklore during the Sassanid rule was called Hezar Afsan (A Thousand Tales). This book was later translated from Middle Persian to Modern Persian, when the title was changed to Hezar-o Yek Shab. This book later became Alfa va ahada Layaly in Arabic and completely lost its Iranic origins. As of today, One Thousand and One Nights is also known to western readers as The Arabian Nights, which is one of the main reasons everyone assumes heroes like Sinbad (Indian) and Aladdin (Chinese) are Arabic. There are, however, a few genuine Arabic tales in the Arabian Nights.

Shahname and 1001 Nights are very much different in style, not only because one is poetry and the other one is prose, but because Shahname focuses on mythology while 1001 Nights contains folktales.

Shahname has three sections: Tales from history, tales from epic legend, and various political stories. The epic section is the only remaining source of Iranic mythology, and is as rich as constructed mythologies. Shahname's epic hero is Rostam, who is believed to be a composite of various earlier mythological characters. Other characters include Afrasiab, Siavash, Shaqqad, the aforementioned Garshasp, and mythic creatures such as Simorgh and Raksh. Most of the epic takes place during wars of the Iranians with Turkic tribes, called Turan (which is in fact, a correct historical term). However, some believe that the "Turan" are actually the Scythian people, who were Iranic, but very primitive.

The historical section of Shahname is not very accurate, as it neglects everything that happened before the Ashkanid era. There's no sign of Cyrus, Darius, or any of the Achaemanids until just before Alexander's Conquest. It's believed that Ferdowsi didn't have access to any source material about that era, because Ashkanids and Sassanids both tried to destroy any sign that the Achaemanid empire existed. The historical section ends with an insult to Arabs, calling them "camel-milk-drinkers" and "lizard-eaters" (these slurs still exist in Iranian society as insults to Arabs), and, probably due to Ferdowsi's resentment of Islam, damns the universe for the victory of the Arabs over Iran. Ferdowsi's resentment of Arabs made him to go a lot of lengths to not use Arabic words in his work, making the total count of Arabic words in Shahname less than 1000 (an average Persian text contains a higher percentage of Arabic words).

There is no mythology in Iranian folklore after the victory of Islam over Persia and pushing its culture out of the spotlight. However, there's a lot of stories and tales written, translated, or collected from the Oral Tradition by writers during this era.

One of the most important books of Persian folklore written in this era is Kelile-o Demene, a translation of an Indian tale by the name of Five Seasons. Kelile-o Demene was actually translated three times from Bharati, once in the Sassanid era, once in the lower middle ages and once after the Mongol conquest. Only the last edition has survived (which is in prose, rather than poetry like the second translation by the poet Rudaki). Kelile-o Demene is narrated by two jackals, and revolves around moral tales acted out exclusively by animals. Human characters in this book are almost always hunters (and not looked favorably upon), or bystanders.

One popular tale from post-Islamic Persian folklore is Sammakk-e Ayyar; Sammak is an outlaw vigilante, akin to Robin Hood, who goes through all kinds of adventures. Another tale is called Amir Arsalan-e Namdar, which got an Anime adaption, so far the only Persian tale getting a treatment by Japanese entertainers. Hassan Kachal is another popular work of Iranian folklore, a story about a lazy boy who gets into troubles by being fooled by his imaginary friend.

Persian being lingua franca in the Indian Subcontinent during the Mughal Rule also attracted a lot of Indian writers to collect folklore and write it in Persian, such as Amir Khusro Dehlavi and his Persian work, Hasht Behesht (Eight Paradises).

This era of Persian folklore lives up to its name, as a lot of names are in Arabic instead of Persian, and most characters are Muslim.