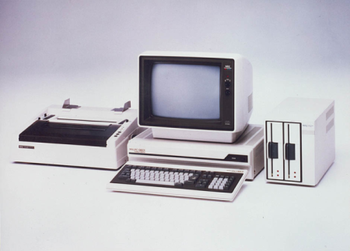 The NEC PC-9801 (which later became the PC-9821) was, loosely speaking, the Japanese equivalent of the IBM Personal Computer, from 1982 until the late 1990s. Like the IBM PC (and Fujitsu's competing FM Towns line), it used Intel 80x86 or equivalent CPUs, and could run versions of MS-DOS and Microsoft Windows, but was otherwise not 100% IBM-compatible. For more details, see the other Wiki's article

When released in the early 1980s, the PC-98 was considerably advanced for its time, featuring higher resolutions (initially up to 640x400) than Western computers of that era, and while the audio quality of a base unit was a beeper that's identical to the one used on the IBM PC, better audio quality could be added on using Yamaha FM synthesis soundcards, which were almost always sold bundled with the machine. The PC-98 eventually sold over 18 million units in Japan alone by 1999, making it one of the best-selling computer systems of the 20th century, rivaled only by the Commodore 64 (17 million units) and the IBM Personal Computer in sales. There were also PC-98 clones manufactured by Seiko Epson.

The characteristic dithered look of PC-98 games is due to the system's idiosyncratic display hardware, namely a pretty anemic Video RAM. Due to the need to display Japanese text with its complex characters, the developers were forced to use high-resolution video mode, which didn't have much of a color depth — early models could show only 8 colors in 640×400 high-res modenote NEC would make this mode one of the many mandatory screen modes in the VESA specification when they formed the standard, which caused it to be co-opted over to the IBM PC compatible world by the mid-90s. The same problem plagued early IBM PC's high-resolution EGA and VGA modes, which were initially not so popular with Western-developed games, but while Western text looked at least somewhat readable in low-res modes, Japanese developers were left without such respite.

The PC-98's contribution to Japanese video game history is a checkered one. Most earlier games for the system were essentially PC-88 games running on a faster 16-bit CPU (and identical video hardware). By the time the PC-98 overtook the PC-88 and MSX, the tide of the PC vs. Console battle in Japan was turning heavily in favor of consoles (including NEC's/Hudson Soft's PC Engine). A few important PC-oriented companies, including Compile, Falcom and Koei, maintained support of the PC-98, though even they started developing many of their important titles for consoles. What ended up thriving on the PC-98 was not so much action games (though indie developers made some remarkable efforts) as RPGs (mainly native as well as Western), Turn-Based Strategy games, Visual Novels, and (overlapping with the previous categories) Eroge. In fact, the PC-98's game library most likely contains a greater proportion of H-games than that of any other platform (beware of NSFW images likely to turn up in searches). By the 1990s, the PC-98 had a very large library of video games, with thousands of titles, though only a small fraction of these games were ever released outside of Japan.

Oh yeah, and the Touhou Project series started here. So there's that, too.

The PC-98's main computer rivals in Japan were the Sharp X68000 and FM Towns, released in 1987 and 1989, respectively. Despite the X68000 and FM Townsnote Actually, the FM Towns is also based on the Intel x86 CPU just like the PC-98 and IBM PCs, it's advantage lies in the audio chipset and advanced GPU, both which renders games written specifically for it unusable on a PC-98 and standard PC both being considerably more powerful (almost Arcade Game quality, in fact) than the PC-98, neither computer was able to dethrone the PC-98 as the Japanese market leader (but the X68000 did come close). It wasn't until the late 1990s that the IBM PC finally ended the PC-98's reign over the Japanese PC market.

An attempt to export the PC-98 platform was made early in the machine's life, believe it or not. The platform were sold outside Japan under the APC (Advanced Personal Computer) series moniker by NEC. Their status of being PC-compatible-but-not-quite caused quite the headache to unaware buyers and ultimately caused the platform to fail outside Japan- while most basic text mode programs made for the IBM PC like WordStar and Lotus 1-2-3 would run without issues on the platform, and while the APC machines do emulate the PC CGA video modes in a bid by NEC to increase compatibility, games and programs that expected the hardware addresses to be identical to that of a PC and tried to access them directly would act up and cause things like spontaneous reboots and hardlocks. This culminated when people tried to upgrade the APC machines (which initially came with MS-DOS 2.11, then MS-DOS 3.10) to MS-DOS 3.30 using disks meant for a IBM PC, and were met with an endless reboot loop- the version of MS-DOS used by APC and PC-98 machines had a different bootloader and kernel from their PC counterpartsnote In fact, attempting to boot a MS-DOS disk meant for a PC-98 on an IBM PC or compatibles would also result in an endless boot loop. NEC quickly discontinued export of the PC-98 platform and started making true PC compatibles for markets outside Japan soon after.

The PC-98 platform, like it's cousin the PC, was also a constantly evolving platform, and followed an identical CPU evolution (ending with using a Pentium processor). Like it's western counterpart, the base audio is just a PC speaker hooked up to a timer, with audio added on via a card for the expansion slot. While the west's standard for audio cards went to third party sound card manufacturers like Adlib (which used a Yamaha YM3812) then Creative Lab’s SoundBlasternote IBM's marketing for their own sound cards were business oriented- with the audio card being pitched as for telephony and specialist use, and the music card being pitched towards professional musicians, and thus were priced exorbitantly and had little to no support from games in the market, things were somewhat different in the east where the sound cards were made by NEC themselves and sold as a bundle with the PC-98 machinenote Unlike IBM in the west, NEC's marketing pushed home multimedia and gaming as potential uses for the sound card. Although in another parallel with the PC, clones were also abundant- the defacto sound card for the PC-98 is one with a Yamaha YM2203 chip, and later a Yamaha YM2608. NEC would also eventually discontinue support for the distinct Yamaha audio cards and proprietary graphics chip for a Crystal WSS-compatible audio card (which uses the new Audio Modem Riser slot introduced with the AC'97 specification) and Cirrus Logic video chipset, although the longevity of the C-Bus meant one could still add the audio cards back if needed(however, these sound cards were not supported in Windows). Some models even started gaining support for Western hardware like PCI cards[1]

. And Creative Labs ultimately even made a SoundBlaster variant that has the C-Bus connector, opening up the computer to running western games with sound. Ultimately, it could be argued that the PC-98 platform simply folded back into the mainstream PC platform as the last models too ran Windows - first Windows 95, then Windows 98, and ultimately Windows 2000. And because Windows abstracts the hardware from software, software written for PC-98 Windows will run the same on IBM PC Compatible Windowsnote However, the OS kernel and bootloader itself is different- Windows installation media meant for a PC-98 cannot be used to install Windows on a IBM PC Compatible and vice-versa.

Games that originally appeared on the PC-98 include: