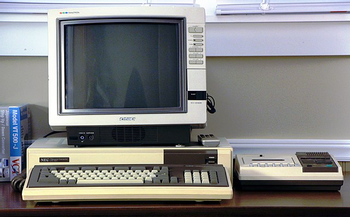 In the 1980s, Western personal computers were scarce in the Japanese market, in large part because they weren't equipped to handle Japanese characters. Instead, Japanese electronics companies like Sharp and Fujitsu marketed their own brands of higher-resolution personal computers, and many others sold the MSX. But NEC, the company which later developed the TurboGrafx-16 console, dominated the market with its PC-8801 series. Introduced in 1981, the PC-88 (as the system is commonly known) held sway until the 16-bit NEC PC-9801 gradually displaced it in the late 1980s.
Advertisement:

Over a dozen different models of the PC-8801 were made. The PC-88VA/VA2/VA3 deserves special mention: it was a 16-bit machine which tried to bridge the gap between the PC-8801 and PC-9801, and also appeal to gamers with graphical capabilities superior to both. However, the NEC PC Engine console, introduced the same year, took away a lot of interest (confusingly, "PC-Engine" was also the name of the PC-88VA's operating system), and the PC-88VA failed to catch on as Japanese gamers looking for a more powerful 16-bit system generally preferred the Sharp X68000.

Notable developers Enix, Squaresoft, Game Arts, Telenet Japan, Falcom and Koei all released their first games on the PC-88; the latter two were releasing new games for the system as late as 1992.

Original to This Platform