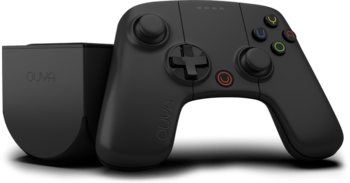 The Ouya was an independent video game console that was initially funded using Kickstarter and released to project backers in 2013. It holds the honor of being one of the highest-funded projects on the site - and one of the quickest deaths for any console on the market.

Ouya was primarily designed as an Android-based micro-console that was pitched in marketing as easily modded by enterprising hardware enthusiasts. Its 2012 development pitch on Kickstarter spurred the project to raise more than $8.5 million dollars, making it the fifth-highest grossing campaign on the site at the time.

The console was targeted towards casual gamers and shipped with the Android 4.1 Jelly Bean system software and software support from several indie developers. However, pre-release reviews of the unit by backers were lukewarm and planned attempts to push a limited-edition white (and later black) version of the console were met with indifference.

In particular, reviewers noted that internet reception was spotty and the stock software was both lacking in features and locked down - in stark contrast to the modding potential that was promised during development. Video output was also permanently DRMed, which hampered attempts at recording it and effectively killed any streaming or Let's Plays. However, the largest problem by far was that the stock controllers were unresponsive and suffered from poor build quality, and pairing third-party ones was often difficult.

The initial library of games had a few interesting titles, but as the multiple issues caused adopters to be disappointed and the system to falter on the marketplace there was little incentive for further development. A few indie games kept being made for it, but eventually the devs moved to other systems; the Ouya, being so locked-down that it couldn't run any of the many already-existing Android games not made specifically for it, was left dead in the water.

With the writing firmly on the wall, the company started looking to sell and eventually, Razer bought everything in July 2015, after it was revealed that the company had failed to renegotiate its debt. Razer officially discontinued the Ouya and integrated the existing game library into their own Forge microsystem.

The true final end of the Ouya would not come until 2019 though, where on May 22, Razer announced that they would shut down the server support for the Ouya on June 25, rendering the full versions of all games released for the platforms unplayable.

Games released on the Ouya: