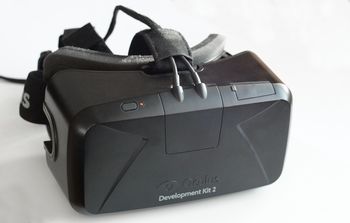 The Oculus Rift is a modern Virtual Reality headset series that rejuvenated public interest in VR after it had failed to catch on in The '90s, largely owing to improved field of view that established a sense of presence in the user, low-latency head-tracking, higher resolution, and general instances of Technology Marches On over the past few decades.

It is generally used for gaming, but there are productive uses for the Rift as well, particularly when paired with the Oculus Touch hand controllers.

It had a very successful Kickstarter in late 2012, followed by the release of two Development Kit iterations and several internal prototypes in between the public Development Kits to allow developers to work on VR software prior to the consumer version's eventual release in March 2016. The demand for the the DK1 and DK2 vastly outstripped supply, in part due to attention on social media garnering a fanbase well before the Rift hardware was finalized.

On March 25, 2014, Facebook bought Oculus for $2 billion, making many people worry about both privacy issues and ads in spite of the Rift developers' insistence that nothing would change. (These fears would prove a degree of validity later.)

Finally, on March 2016, the final iteration of the Rift, often referred to by enthusiasts as "Consumer Version 1" or simply CV1 to differentiate it from the earlier Development Kits, released to the public. Reception was good among those who didn't have their pre-orders delayed by several months, but at this point, the Rift already had competition on the horizon in the form of the HTC Vive, which included tracked motion controllers of a sort that the Rift would not have until Oculus Touch's release on December 6, 2016 - a good eight months after the Vive's initial release.

The whopping $599 price tag revealed on pre-order day also tempered excitement, as did the reveal that the Touch controllers would add another $199 to the price several months later. Nevertheless, it has garnered a significant enough userbase to warrant more efforts in VR software development.

On March 1, 2017, the Rift had a significant price cut, with the base HMD being $499 and Touch being halved to $99 after three months, with additional sensors for reliable room-scale tracking now being $59 instead of $79. The software update released the day before also fixed some irksome tracking issues Touch users had to deal with.

On March 20, 2019, the successor to the Rift, the Rift S, was released. It was followed 2 months later by the Oculus Quest, a stand-alone device with inbuilt hardware and games, (though supporting PC play through link cables after release).

Following this, the Oculus Quest 2 was released on October 2020, and quickly became highly successful owing to its more accessible design, quickly becoming a predominant force in the entry level for the Virtual Reality market, being available for $300. However, it was also harshly criticized for requiring the use of a Facebook account in order to use and collect data with, with Facebook being able to brick the device if a false username or birth date was used.