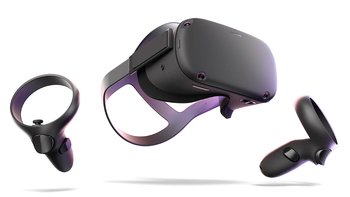 The Oculus Quest, released in May 2019 for $399, is a standalone Virtual Reality headset, meaning that the headset itself contains all the electronics needed to drive it; it does not need to be connected to a phone or PC. Unlike its standalone predecessor, the Oculus Go, it has full positional tracking with two hand controllers, replicating the tracking capabilities of its PC VR cousin, the Oculus Rift. In early prototype incarnations it was known as Santa Cruz. Its launch was received with wide acclaim from press and enthusiasts alike, with Mashable rating it the "#1 Best Tech of 2019 (so far)".

It accomplishes all this without the use of any external sensors by using four small cameras and advanced computer vision processing to map your environment and track precisely where you are in it as you move around. The two hand controllers have a ring of invisible infrared LEDs that are also seen by the camera, allowing it to track them precisely through space, as long as the cameras can see them (they will temporarily lose tracking if placed behind your back, or too close to the headset). The Quest can be used almost anywhere except in direct sunlight or in complete darkness, and supports play spaces up to 25 by 25 feet. The Quest internally uses the same Snapdragon 835 mobile graphics chipset as the Google Pixel 2 phone, but with an active cooling system and a custom VR OS that allows it to effectively perform at a much higher level.

The second product in the Quest line, the aptly titled Quest 2, was released on October 13, 2020. The Quest 2 boasts better resolution, a higher refresh rate (once enabled; the default 72Hz is the same as the original's), 2GB more RAM, a faster processor (Snapdragon XR2) and either a lower price or better storage than the original. The 128GB model (64GB on launch, this capacity was phased out within the year) runs for $299, while the model with bigger storage is 256GB and $399 this time around. All of this does come with a few compromises, as the Quest 2's strap and interpupillary distance controls have been noticeably downgraded from the previous model (though the strap is designed to be replaceable, meaning aftermarket straps are much more viable than they were for the Quest 1). The Quest 2 experienced some controversy at launch as it's the first Oculus device that requires a full-fledged Facebook account to operate; an Oculus account will not do on its own. A VR port of Resident Evil 4 was the first official release that required a Quest 2, though the game does work when sideloaded onto a Quest 1.

The flagship launch title of the Quest is Beat Saber, a mega-popular VR rhythm game where you slice cubes with light sabers in time to music. It launched with about 50 other titles, many of them ports from existing PC VR games. Additionally, it can stream VR games from a gaming PC over USB or wifi, allowing it to play any existing PC VR title.

As of March 2021, the Quest 2 was the most popular virtual reality headset on Steam VR. This does not count Quest owners who don't use Steam VR, particularly those without gaming PCs at all. Immediately after this information was released, The Climb 2 became the first series to transition from a PCVR franchise with a Quest port to a Quest exclusive.

The Quest has an extensive modding and homebrew scene. In addition to the main Oculus store, experimental games are available via the AppLab platform, serving as a roughly analogous marketplace to Steam Early Access. There is also a dedicated side-loading community called SideQuest, featuring unofficial content (primarily original games, mods, and unofficial ports).

The Quest has a subreddit

is viewable in an web browser.

Other apps of note:

Notable Websites with VR Content Suitable for the Quest: