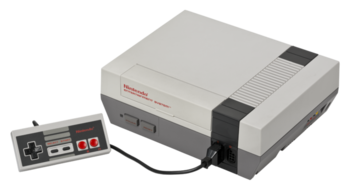 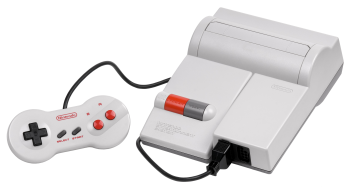 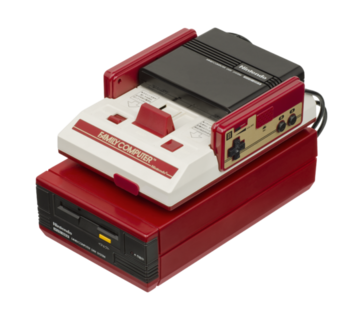 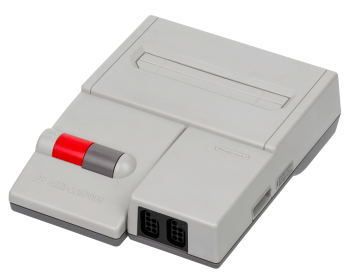 "Now you're playing with power."
Advertisement:

The system that brought video game consoles back from The Great Video Game Crash of 1983 in North America (they were pretty healthy elsewhere) and ushered in The 8-Bit Era. Known internationally as the Nintendo Entertainment System (NES), in Japanese as the Family Computer (commonly abbreviated as the "Famicom") and in South Korea as Hyundai Comboy (현대 컴보이) made by Hynix with unlicensed clones made in Eastern Europe, India, the Middle East and in China (most notably the Dendy in Russia, although many in Asia are also familiar with clones sold under the brand Micro Genius), it was the console that brought in the oldest and longest lasting competitor in the Console Wars, Nintendo. It also served as the initial console for many of gaming's oldest franchises, introduced the modern third-party licensing model for video games, and set the standards in control pads for consoles. It is still very much an icon of video games (less so the redesigned variant).

alongside the Sharp Twin Famicom (which combined the base Famicom hardware and the Famicom Disk System into one unit with composite RCA output; the later AN-505 "Twin Turbo" model added a power LED, slightly longer controller cables and was the only official NES/Famicom console with turbo controllers built in) and finally the Famicom Titler, which allowed you to use the Famicom hardware to superimpose rudimentary subtitles on VHS video tapes (this is the only consumer model that supports RGB output natively outside the Playchoice 10, but finding one of these units is difficult in and of itself, regularly going for over $1000). Additionally, companies like Konami actually made licensed famiclones, with licenses and patent access officially granted by Nintendo.

While the Japan branch was able to enforce this without resorting to technical means, the American one was wary of the Atari situation when everybody and their dog was producing carts for the Atari 2600... hence the 10NES and 72-pin cartridge, as well as the refusal of the American and European branch to license out the patents for the American and European variants of the console. But in a misguided attempt to make it easier to integrate the never-released American counterpart to the Famicom Disk System (the Japanese version used a rather convoluted hookup method that wouldn't have worked with the NES's front-loading design), NoA engineers removed two pins that connected the motherboard to the sound extension chips in the cart and rerouted them to the expansion connector on the bottom of the console, ensuring that American releases would always have inferior sound. note It’s actually a bit more complicated than that — instead of removing the two pins, the two pins were routed such that they went straight from the cartridge slot to the expansion port instead of into the sound bus proper, while another pin on the expansion slot is connected to the sound bus. Meaning support for those special cartridges could be restored if a device were to connect those pins together on the expansion slot end (which was one of the functions of the ENIO EXP accessory) — that, or a simple modification job could be done to the console internally to restore support for those cartridges.

However, Nintendo of America did give Sharp the blessing of launching a North American version of the NES TV, now remade to look like a VCR-TV combo unit and dubbed the "Game Television". Sharp sold a limited number of units as a market test at Sears and Kmart in several markets in the U.S., and shortly later, market tested a revised model in a limited fashion again at the two outlets, but ultimately Sharp did not go on with a nationwide launch

. Due to this nature, the TVs are considered a rarity and a must have to the most diehard Nintendo collectors.

The NES-101 (aka "NES 2"), a top-loader styled after the SNES and a bit after the original Famicom, was released in 1993 and not only used a 2-pin version of the original 60-pin connector but further lacked the 10NES chip. Despite being released in all Nintendo markets simultaneously, nobody remembers it. The last official game, a PAL-exclusive port of Virgin Interactive's The Lion King, was released in 1995, after which the console as a whole was discontinued in the west. Japan, meanwhile, produced new units until 2003, recorded sales numbers up to 2004, and continued repair support until 2008, only stopping because Nintendo of Japan finally ran out of the necessary parts and had no way to source new ones within a reasonable budget. At a whopping 20 years, two months, and ten days, the Famicom had the longest lifespan of any video game console to date.note This is, of course, discounting the plethora of third-party Sega Master Systems still being made to this day, seeing as how Sega themselves no longer officially support the system.

(known as the NES Classic Mini in Europe), a miniature Plug N Play Game console with 30 built-in games.List (exclusives in bold) Balloon Fight, Bubble Bobble, Castlevania, Castlevania II: Simon's Quest, Donkey Kong, Donkey Kong Jr., Double Dragon II: The Revenge, Dr. Mario, Excitebike, Final Fantasy, Galaga, Ghosts 'n Goblins, Gradius, Ice Climber, Kid Icarus, Kirby's Adventure, Mario Bros., Mega Man 2, Metroid, Ninja Gaiden, Pac-Man, Punch-Out!! Featuring Mr. Dream, StarTropics, Super C, Super Mario Bros., Super Mario Bros. 2, Super Mario Bros. 3, Tecmo Bowl, The Legend of Zelda, and Zelda II: The Adventure of Link The device's only function was to play these 30 games; it was not capable of playing any game paks or connecting to the internetnote Though its emulator-based software and lack of internet connection make it quite easy to mod and add new games via a PC. The control deck also came bundled with one NES controller, with additional controllers being sold separately. The controller ports are also identical to those found on the Wii's Wiimote, meaning that the NES Classic Edition's controller and the Wii Classic Controller can serve as effective substitutes for each other. The Classic Edition hit store shelves on November 11, priced at $59.99; while this might seem rather expensive for a plug-and-play device, many noted that it was only around one-fifth the price of 30 actual NES game paks and around two-fifths the price of buying all of those games on the Virtual Console, and that's not even getting into the price of a regular NES nowadays (that is, assuming you're not buying the Classic Edition from any scalpers). Despite high demand through the system's life, though, Nintendo unexpectedly pulled the plug on it very early while stock problems were still abound, discontinuing it in April of 2017. It reportedly sold 2.3 million units during its short life, and secondhand units now command the prices you expect from scalpers. On September 2017, Nintendo announced that the NES Classic will return in stores at the end of June 2018.