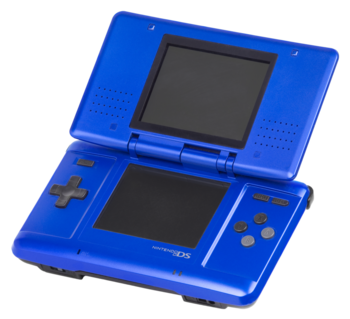 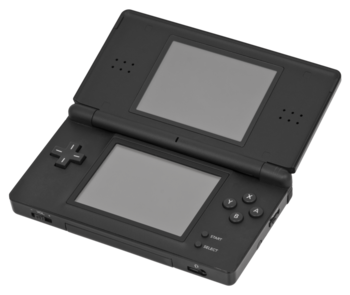 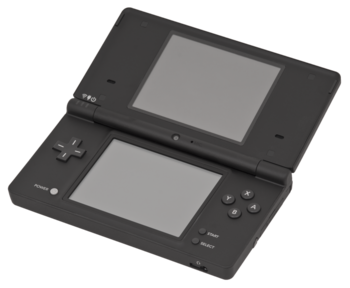 From top to bottom: the original model DS (a.k.a. the DS Fat), the DS Lite, and the DSi
"Touching is good."
Advertisement:

Their first step was, instead of simply making "a more powerful Game Boy", trying something new with the system to alter the gameplay and get developers out of a rut. With the DS, the method was to add a touchscreen in between the d-pad and the buttons, while keeping the regular screen above it. The public prototype was codenamed the "Developer's System", or the "DS" for short.note It was initially developed under the code name "Nitro" in-house; DS games still carry the "NTR" indexing code as a result, with the exception of games capable of using the DSi's additional features, which use "TWL" instead. However, because of its two screens, the gaming press kept thinking it stood for "Dual Screen". Recognizing it was giving the system name recognition already, Nintendo made "DS" the official name.

When it was in development, Nintendo presented the device as a "third pillar" to complement the Nintendo GameCube and the Game Boy Advance, rather than claim that the DS was the latest iteration of the Game Boy hardware line. There is some indication that this was a marketing ploy — Nintendo did not want to potentially tarnish the positive image of the much-beloved Game Boy line if the DS failed to live up to expectations. Unnecessary in retrospect, and it didn't stop people from calling it the "Game Boy DS" anyway. Although, at one point, they did plan to call it the City Boy, but they fortunately didn't.

With the Game Boy Advance having owed much of its success to updated releases of SNES games, it looked early on as though the DS would do the same for Nintendo 64 games. This never happened in the end, though, with Super Mario 64 DS, Ridge Racer DS, Rayman DS, and Diddy Kong Racing DS being the only major examples. Exactly why this was the case is debatable, though the most common explanations are that Nintendo was making a push for more innovative games instead of ports with touchscreen gimmicks bolted on (a major problem with a lot of the system's early games), Nintendo 64 games wouldn't work as Killer Apps since the N64 contributed to Nintendo's market share decline in the late '90s (and thus wouldn't generate hype), and/or the system was poorly-suited for Nintendo 64 ports in the first place due to the lack of an analog stick (tellingly, the 3DS, which did include a stick, would actually get more in the way of Nintendo 64 remakes).

So those advantages (which Sony seems to agree with itself due to the change in media with the PSP's successor, the PlayStation Vita), combined with lower development costs, made developers turn around and give huge support for the DS. It wasn't a total reversal, as developers also supported the PSP (at least in Japan), but it's definitely a redemption for Nintendo.

The original and Lite versions of the DS were backwards compatible with Game Boy Advance (but not Game Boy or Game Boy Color) games thanks to a second cartridge slot known as "Slot 2" on the bottom of the system, and the games could be played on either screen. DS games were actually capable of communicating with whatever was in the GBA slot, which led to a large number of interesting peripherals such as a dedicated Rumble Pack and the Guitar Grip for Guitar Hero games. Some DS games could also connect with GBA games directly, most famously the various main series Pokémon games being able to transfer Pokémon from the GBA to DS versions.

The DS also had a redesign to address problems noted with the first system, such as a dim screen light and the bulk. The so-called "DS Phat" is the biggest of Nintendo's handhelds since the original Game Boy, while the DS Lite is just about the size of the original GBA. Another redesign, the DSi, dispenses with the GBA slot entirely and slightly decreases the battery length to increase the size of the dual screens, slim its third dimension even more and add an SD Card slot, two cameras and 256MB of onboard flash memory, all built-in. Games could now be downloaded through a DSi Shop Channel, much like the Wii's own Wii Shop Channel. The DSi sold over half a million units in two days

While the DSi was a definite step-up in terms of features, it hurt backwards compatibility with some previous games. Anything that used Dual Slot mode (Pokémon Diamond and Pearl or WarioWare Touched, for example) could no longer do so. Games that used Option Paks (Metroid Prime: Hunters' Rumble Pak) had no built in replacement, while some games and applications (Guitar Hero On Tour and the original DS Browser) were simply unplayable since their accessories were incompatible. This also introduced a glitch that would very rarely affect Option Pak compatible games; even when the accessories were optional the game would incorrectly detect an incompatible Pak and refuse to play.

best-selling handheld video game system of all time, with over 153 million units sold as of December 2012. It sold just less than 2 million under the PS2, which means it's also the second-highest selling video game system in general. It prints money.

And 32 million or so of those money-printers were sold in Japan. While this entry's going long, it is worth emphasizing at this point: in Japan, the DS was quite possibly the single most culturally-relevant gaming system since the Famicom, and certainly since the first two PlayStations. At 30 million-plus units, virtually every household in Japan owned at least one DS by the late stage of the system's life; it hosts some of the best-selling software in Japan, ever, and was a hotbed of new IP and ideas once developers really began to dig into the possibilities of its interface. Even relatively niche games (like Etrian Odyssey) found significant audiences on the system, and the system's cultural impact was profound; the success of the DS allowed Japanese developers to actually sidestep the early parts of the HD era and focus instead on creating lower-cost games for the DS, and later, the PSP and 3DS. This was of great consequence, and the resulting divide between Japan's preference for handhelds and the West's preference for set-top consoles even ended up influencing the creation of the Nintendo Switch.

Perhaps the most enduring legacy of the DS was that it became the progenitor of mobile phone gaming. This was due to the intuitiveness of the touch interface and an expanded library that included games and software to appeal to casual gamers. Both iOS Games and Android Games would take these a step further, as cell phones were even more portable and accessible than dedicated handheld gaming devices, and they consequently became stiff competition for Nintendo's new casual player base (not helped by Nintendo's notoriously slow ability to adapt to the Internet). Ironic. As game journalist Jeremy Parish put it

, the DS may have saved Nintendo from its GameCube era slump, but in becoming the unintentional Trope Maker for mobile gaming, it also may have become the Genre-Killer for handheld gaming as people knew it at the time.

On the plus side, the ubiquity of flashcarts did lead to a fairly decent homebrew scene for the platform - including some solid emulators for the Game Boy and Game Boy Color - though the limited hardware means that the support isn't nearly as strong as it is for other handhelds like the 3DS, PSP, or Vita.

It was succeeded by the Nintendo 3DS, which includes 3D technology. Just like the PlayStation 2 continued to exist well into the PS3's lifespan, it was expected that the non-3D DS family will stick around for some time after the release of the 3DS... which was true, in a sense. After the 3DS' release, the only major DS titles were Kirby Mass Attack, Pokémon Black 2 and White 2, and Ace Attorney Investigations 2, the last of which never released outside of Japan. Nintendo ended Wi-Fi service for the DS on May 20th, 2014

, and all major developers, both first- and third-party, jumped almost exclusively to the 3DS. (This is at least partially due to the rampant piracy DS software had accumulated.) Needless to say, with its gangbuster sales, DS systems and their games are not in danger of becoming scarce.

Some DS games were ported to the Wii U through the Virtual Console, as that system's GamePad allowed the preservation of the dual screen setup. The first three included Brain Age/Dr. Kawashima's Brain Training, Mario Kart DS, & Yoshi's Island DS.