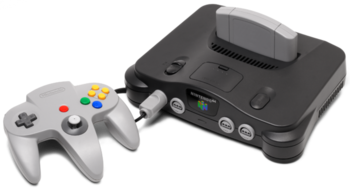 Get N or Get Out.
By 1996, The Fifth Generation of Console Video Games had already been underway for quite some time; the PlayStation and Sega Saturn had both been released in 1994 in Japan and 1995 elsewhere, yet despite their successes at home were failing to adequately crack markets abroad. Meanwhile, despite being one of the first next generation consoles to be announced, Nintendo's "Project Reality" was nowhere to be seen. This isn't to say that Nintendo had been dragging their on the whole endeavor; the fact of the matter was that Nintendo felt like they could take their sweet time. Sure, while some regions were quite partial to other consoles, PC gaming, or still valued the arcade above all else, on a global scale? Nintendo had been the dominating force in the gaming industry since 1985. The NES had no equal, the SNES had beaten the other fourth generation home consoles by a good margin despite being late to market itself, and the smash success that was the Game Boy had just gotten a much unneeded second wind thanks to a little JRPG called Pokémon Red and Blue.note Please ignore the eyeballs on legs gathering dust in the corner. Needless to say, Nintendo was comfortable with taking a few more years to fine-tune their 64-bit console, and the Nintendo 64 saw release on June 23, 1996 in Japan and September 26, 1996 in North America, with rollouts in Europe starting in March 1997.
Advertisement:

The N64 has a bit of an odd legacy, but let's begin with some of the good. The system is best known for being host to some of the most groundbreaking and influential games in the industry's history, with titles such as Super Mario 64 and The Legend of Zelda: Ocarina of Time making the act of breaking through the Polygon Ceiling look like child's play and laying the foundation for countless other 3D games to follow decades after their release. The N64 also natively had four controller ports versus the competitions' two, which led to it being the go-to system for multiplayer fun; many who grew up with the system fondly remember spending hours with their friends playing games like GoldenEye (1997), Mario Kart 64, Super Smash Bros. 64, and the early Mario Party titles. GoldenEye is also credited as legitimizing the First-Person Shooter genre on home consoles after years of questionable Doom portsnote Plain fact is that outside of the PlayStation none of the Doom ports were on anything powerful enough to run it, the Atari Jaguar came close but at the cost of that port missing Doom's trademark music, setting the stage for Halo to firmly cement them as a multiplatform mainstay. It was also the first mainstream console to use an analog stick for its main controller, and have force feedback via a Rumble Pak, standardizing such features.

Moving onto the more... shaky part of the Nintendo 64, for as much praise as the console gets, it cannot be denied that it was the beginning of Nintendo losing their undisputed dominance in the video game market. Thanks to the company's reluctance to use CDs, the high licensing fees they had for their cartridges, and years of restrictive policies that third parties were tiring of, many major developers and publishers (including Atlus, Capcom, Jaleco, Namco, Konami, Squaresoft, Sunsoft, and Tecmo) jumped ship to the PlayStation's more welcoming ecosystem of CDs, cheap licensing fees, a near-complete lack of content restrictions, and even marketing assistance; they would release few, if any, games for the N64. Naturally, the audiences that would have bought an N64 got PlayStations instead when it became clear that the games they wanted would now be over there; particularly Eastern RPGs, as Squaresoft was one of the companies that ditched Nintendo completely during this era, taking the Final Fantasy series and the rest of their output with them. Not every major third-party developer left, mind you — there were still exclusives (such as Namco Museum 64) or ports with exclusive features (such as Resident Evil 2) — but for the most part, the Nintendo 64 was treated second to the PlayStation thanks to the restrictions that cartridges had versus CDs. A deeper dive into why Nintendo decided to stick with cartridges instead of adopting CDs like everyone else, and other downsides of that decision, can be read on the Analysis page.

With much of their third-party support gone, it set the stage for a new reality that Nintendo would have to deal with even for their future successful consoles. That being that they could no longer rely on big third-party releases to bolster their release schedule, because they could no longer ensure that those games would even be on their hardware. If they want to keep momentum going, they had to make up the difference and release first-party games on a regular schedule. Which leads to the second issue that the Nintendo 64 faced: Nintendo... wasn't able to pull that off. The N64 gained something of a reputation for releasing maybe three or four fantastic, must-have games a year, and next-to-nothing else worth playing. This is probably best exemplified by the beginning of its life in North America. The system only had two launch titles: Pilotwings 64 and Super Mario 64, nothing else released for more than a month afterwards, and only six other games would come out by January 1997 (two of which were porting disasters). To add salt to the wound, one of those porting disasters was Cruis'n USA, which was actually meant to be a Tech Demo Game.note Nintendo bragged about the arcade version already running on Nintendo 64 hardware (it didn't) and promised an "arcade-perfect port" (it wasn't). A fair number of Nintendo's own franchises would also fail to materialize during the console's life, including planned installments in the Fire Emblemnote which instead opted for another installment on the SNES in 1999, Mothernote EarthBound 64 would become a Game Boy Advance game, and Nintendo Warsnote was scrapped late in development for unknown reasons series.

Early on, Nintendo announced plans for a hardware add-on that, instead of CDs, would use a proprietary rewritable magnetic disk format as its high-capacity storage medium. Unfortunately, the Nintendo 64 Disk Drive (or 64DD) saw constant delays and was a commercial failure when it was finally released in Japan in December 1999, which led to Nintendo scrapping plans for a Western release. Although over sixty games were destined for the 64DD, only eightnote not counting a dial-up utility disk and an F-Zero X Expansion that required the base game to play would ultimately see the light of day. All of them developed by Nintendo, as every third-party developer that pledged support ended up backing out as the hardware kept getting delayed. All the other games intended for the 64DD were either reworked into regular Nintendo 64 games, ported to the PlayStation or GameCube, or cancelled entirely. Not that it would have matter too much if it was successful, as it didn't fully solve all the issues that cartridges had anyway.

Of final note is the changing demographics of video game players. During the latter half of the '90s, the average gamer age started to increase in a meaningful way. While the portable gaming space would continue to be dominated by children and causal audiences, the home console space was starting become more and more the domain of teenage and young adult males. Combine this with Nintendo continuing to force developers to Bowdlerise in-game content to be more "family friendly", with even M-rated titles like Duke Nukem 3D getting told to change the names of their items to be less adult (e.g., steroids became "Vitamin X"), and you have the start of Nintendo's reputation as a "kiddy company" among gamers, with their games and consoles starting to be regarded as being strictly for children and overly-protective parents. The full effects of this wouldn't be felt until the Nintendo GameCube, but it begs mention here due to the PlayStation being successful in good part because its marketing captured this older gaming audience.

All-in-all, the Nintendo 64 ended its life with about 32 million units sold; while this is only about a third of what the PlayStation sold, it still put Nintendo comfortably in second place thanks to Sega's fumbling with the Saturn.

Console variations (in order of release)

Controller variations (in order of release)

"Thank you for playing Nintendo 64!"
— Charles Martinet, in the kiosk demo