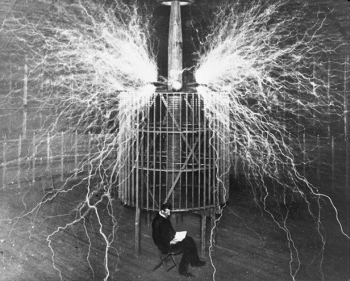 Born to Serb parents in the village of Smiljan (Austrian Empire at the time, Croatia today) and immigrant to the United States, Tesla is best known for his eponymous electrical transformer, the Tesla Coil, closely followed by his development of the first feasible alternating current power generator, ultimately built at Niagara Falls. Other patents of his include the equipment for radio, vertical take-off and landing gear, fluorescent light bulbs, and a radio-control mechanism that contained the earliest practical example of a logic gate. He's also credited with a lot of early theoretical work on electromagnetic radiation that was later expanded into radar.

However, a combination of poor business decisions, economic trouble, and pressures from arch-rival (but not enemy) Thomas Edison eventually led to the end of his good fortunes, and he acquired obsessive/compulsive tendencies and other eccentricities. He ultimately died alone in a hotel room after failing to sell a giant Death Ray to the US government. It is safe to say that without this man, the 21st century would not exist as we know it. But for most of the later twentieth century, not a lot of people knew him (although the good news is that recently, he has been gaining more and more publicity).

Despite his relative obscurity later on, Tesla was well known in his own time. Examples include having things named after him, receiving multiple Nobel Prize nominations, being on the front cover of Time Magazine on his 75th birthday, and New York City mayor Fiorello La Guardia reading a eulogy over the radio for him when he (Tesla) died. In recent years, his reputation has very much swung the other way as a new generation of writers and scientists rediscovered his inventions and research.

These are the facts. Everything else is very, very much up for grabs. Artificial lightning? Never left home without it! (In fact, one of the highlights of any of his demonstrations was shooting lightning from his fingertips.) Earthquake Machine? Probably not. Faked his death and escaped to Soviet Russia? Doubtful. Assisted by an Ancient Tradition of assassins reaching back to Biblical times? No. Rescued by an immortal time-travelling prostitute who took him away so he could continue his work? Say what? Caused The Tunguska Event with the help of Guglielmo Marconi while testing an experimental antigravity teleportation engine ...You're just messing with us now, right?

Conjecture and conspiracy aside, some of the things that we do know Tesla was either working on or had plans for are quite terrifying. Aside from the above mentioned Artificial Lightning, Earthquake Machine, and the Death Ray (a particle beam weapon, to be precise) he tried to sell to the Government, Tesla had plans (whether or not any were close to functional is up for debate) for Force Shields, Gravity Manipulation, Wall Phasing and Teleportation. You know what they say about "genius and madness"!

Because of both his behavioral and intellectual eccentricities, Tesla is both the Ur-Example of the Real Life Mad Scientist (literally as some of the first depictions of the trope in film came from Thomas Edison's studios) and the fictional person to go to for all technological arcana and fringe science. The tesla, the S.I. unit of magnetic field strength (defined as a field that applies a one-newton force to a one-coulomb charge moving orthogonally at one meter per second), takes its name from him, as does the Tesla Motors Company, a firm dedicated to building electric cars.

For examples relating to his most famous invention, see Shock and Awe.

On a final, completely unrelated note, he was also close friends with Mark Twain. Here's a picture

◊ of them goofing around in Tesla's lab.

Tropes as portrayed by fiction: