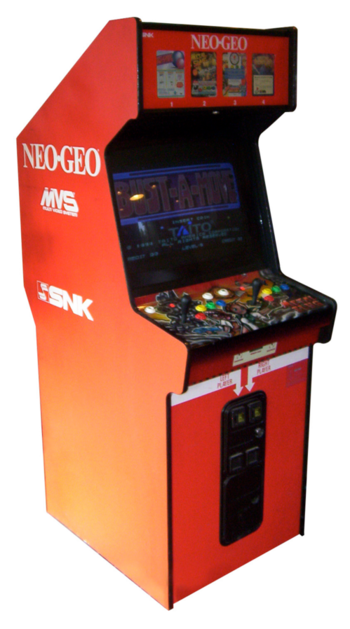 From top to bottom: The Neo Geo MVSnote The cabinet shown here is the "4-slot" version, meaning it could feature 4 games at once. It was also available in 1-slot, 2-slot, and even 6-slot versions (some 1-slot machines even had dedicated marquees and artwork).; the Neo Geo AES; the Neo Geo CD
"Neo Geo, Neo Geo. Four bright buttons and two joysticks.
Neo Geo, Neo Geo. Cool red cab and a name that sticks."
—Keith Apicary, Four Bright Buttons & Two Joysticks
Advertisement:
NEO・GEO

In the late 1980s, SNK developed an Arcade system that could work with multiple games: the Neo Geo Multi Video System (MVS). Unlike most arcade games, which have dedicated motherboards and ROM chips, the Neo Geo MVS used cartridges like a game console. A home version was the logical extension, and thus was born the Neo Geo Advanced Entertainment System (AES).

However, arcade machines cost a lot more than home consoles, and SNK knew that. At first, the AES was a luxury item for rent in hotels. When guests started letting the company know they'd be willing to buy them, SNK decided to put it on sale. The Neo Geo was released to the general public in January 1990. At the time of release, it was the most powerful home video game system available.

The Neo Geo is notable for being the first console to save data on memory cards; the principle behind this was that players could save their data from a session at the arcade and resume it at a later time from where they left off without the need for a password, either at the arcade or at home (though the latter required players to own the cartridges for the games they'd saved). The format, however, wouldn't really take off until the advent and growth of CD gaming a few years later.

The cost was high, not just for the processing power, but for the joysticks and games. The games cost about $200, partly because their size was comparable to N64 carts half a decade before the N64 itself, and partly because of their architecture — the RAM chips needed to play the game were built into the cart rather than in the system. The system launched in the US, with two controllers and the game Magician Lord, at $650. Just a bit later, a bundle with no game and one controller sold for $400.

SNK released the Neo Geo CD in 1994; unlike the CD-ROM units for other 16-bit consoles, it was intended less to enhance the system's capabilities than to allow games to be rereleased in a cheaper format. (There were only eight CD-exclusive titles.) It was $300, and games were $50, but with a 1x CD-ROM drivenote A version with a 2X drive, called the CDZ, saw limited release in Japan it fell victim to Loads and Loads of Loadingnote On the other hand it also has no anti-piracy measures whatsoever and will happily play burned CDs, making it popular amongst the budget-minded collector that can't justify spending a week's salary on one AES game (which even today cost as much or more on the secondary market than they did back then). Like all NEO-GEO hardware it also has no region coding.

Since the Neo Geo was always intended to be an arcade system that just happened to have a home version, games made for it followed the associated design philosophy. Shoot 'em ups, fighting games, puzzle games, run and guns, etc. Longer games like RPGs or games more suited to home play like platformers were almost entirely nonexistent.

The price of the Neo Geo and games meant the mainstream was out of the question, especially since the system was intended to appeal to the shrinking arcade audience. SNK decided to upmarket to appeal to hardcore gamers, who actively embraced the system just as they would the Sega Dreamcast a few years later. This had some initial success, but unfortunately that cost didn't go to proper measures to combat piracy, and the system was rife with it. SNK blamed that as a major factor in their bankruptcy in 2000, though the Neo Geo managed to not only survive their collapse but last long enough to see their reconstitution as SNK Playmore.

The final Neo Geo game, Samurai Shodown V Special, was released in 2004. The MVS turned out to be the longest-lived arcade hardware of its kind, outlasting Nintendo's VS. hardware by several years and serving as the second-longest-lasting video game console in history (beating out the Atari 2600 by just four months), bested only by the Nintendo Famicom. But the Neo Geo lives on, with fans making homebrew games for it years after the system was discontinued.

On December 18, 2012, SNK Playmore released the Neo Geo X, a handheld that had twenty Neo Geo games built into it and could play additional games through the SD card slot on the side of the unit.

On December 8, 2015, SNK Playmore and DotEmu released computer ports of various Neo Geo games through Humble Bundle as part of the Humble Neo Geo 25th Anniversary Bundle, and later re-released the games a month later on the Humble Store for those that missed the bundle.

In 2016, Hamster Corporation began releasing digital versions of the arcade/MVS versions of the games under the "ACA NeoGeo" series (a subdivision of their Arcade Archives series), initially for the PlayStation 4 and Xbox One, than expanding to the Nintendo Switch beginning in 2017.note Some of the home/AES versions had previously been re-released for the original Wii as Virtual Console games.

In 2018, SNK released the Neo Geo Mini, a portable console styled like a miniaturized MVS cabinet. While the games on the unit are the home console ports with limited continues, there is a save system that lets players make save states that they can load from. There are two different versions of the Neo Geo Mini with different game lineups: a Japan version and an International version. A third version of the Neo Geo Mini, the Christmas Limited Edition version, was released around Christmas time in 2018, it featured a different roster of games and came in a highly-desirable-in-North-America red color (the international edition was released in white and blue- a familiar color to those used to the "trash can plastic" cabinets found in abundance in Japan and Asia since the late 90s, but not in North America, where the iconic red wood cabinet unique to North America was firmly burned into many arcade patrons' minds). This was followed by a quartet of Samurai Shodown special edition models (Kuroko, Ukyo Tachirana, Nakoruru and Haohmaru) for North America as well as a dedicated A.C.E version for China.

In short, this was a beast. It took until the Sega Saturn and PlayStation for stronger home video game systems to come out for less than $400, and even then the PlayStation was primarily made for 3D (with only the Saturn rivalling its 2D capabilities). There wasn't a dedicated 2D home video game system to rival it until the Game Boy Advance, coming out just over ten years later.

On a side note, it's also interesting how the Neo Geo share many of the standard components as that of the Sega Genesis despite being developed by rival companies independently of each other, even having the same Z80 and Motorola 68000 CPU. Even the AES/MVS' sound chip is from the same family as the Genesis' YM2612 and has almost the same features as both the YM2612 and TI76489 PSG combined (short of two FM channels, which it makes up for with seven ADPCM channels). On the other hand, this CPU combination was probably pretty popular for it's time, and was even used By Taito's System Z boards, and Sega has recycled the Genesis hardware design for several different arcade board models.