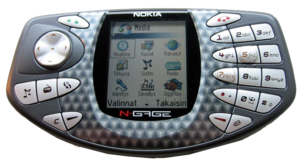 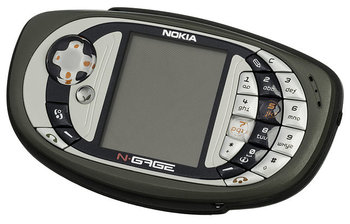 Top: the original design of the N-Gage. Bottom: The N-Gage QD.
Advertisement:

The N-Gage is a handheld device created by Nokia and released in October 2003, based off their Series 60 mobile phone platform running on top of Symbian. As cell phones began to become more commonplace at the Turn of the Millennium, Nokia saw a valuable opportunity: as it was, gamers had to juggle both a cell phone and their gaming handheld of choice — why not combine both pieces of technology into single device and hopefully lure people away from Nintendo's competing Game Boy Advance?

On the positive side of things, the N-Gage was a more powerful device than the GBAnote The GBA was comparable to the Super Nintendo, while the N-Gage was closer to the PlayStation. and certainly had all the features of a cell phone. In fact, it actually boasted several features that are common nowadays in modern handhelds and smartphones: it made use of Bluetooth technology and had internet connectivity (both of which could be used for multiplayer titles), allowed for MP3 audio/video playback, could be used to check email, and even had a built-in FM radio.

Despite these things, however, the N-Gage had several drawbacks. Firstly, the face buttons were the 5 and 7 keys on the keypad, making it really easy to press the wrong ones during gameplay. Second, the game slot was essentially a MultiMediaCard slot, and like most high-end color screen phones at the time, that slot was located inside the battery compartment, meaning the user had to essentially disassemble the device and remove the batteries just to switch games. It also doesn't help that the games were distributed on commodity MultiMediaCards, making it susceptible to piracy — scene groups such as the now-defunct BiNPDA released cracked versions of N-Gage titles which could be played on most if not all Symbian Series 60 devices, making the purpose of releasing a dedicated gaming phone rather moot. Another thing was its awkward screen orientation, restricting the playfield to a very narrow field of view, giving the player a disadvantage, especially with platform games and first-person shooters. And most infamously, the speaker and microphone were placed on the bottom so you had to hold the edge of the phone to your ear as you made calls, making it look like you had

a taco stuck to the side of your head. One other thing that isn't mentioned as often but hurt adoption of the device was the fact that one had to have a cell phone contract with your local provider to purchase the device from a lot of stores that carried it — which made it very hard to purchase for children as presents and essentially limited its demographic, since children in the early 2000's typically did not have phones, let alone a Nokia 3310. Not to mention that no CDMA variant was made either, effectively snubbing out those in areas where the likes of Verizon have a better coverage.

In April 2004, Nokia released the N-Gage QD, which fixed some of the previous system's flaws. Not only was it smaller and rounder than before, but it also had the MMC cartridge slot conveniently placed on the bottom, with Nokia even going so far as to releasing an "MMC Expander" accessory allowing players to carry two games at a time and switch between them as needed. The speaker and mic were also moved to the front of the system, making phone calls more convenient and less ridiculous. However, features like MP3 playback and USB connectivity were removed to cut costs, though the former can be brought back through third-party media players.

Because of these many physical drawbacks and the lack of quality games, the N-Gage sold poorly and was ridiculed by gamers and Nokia fans. To Nokia's benefit it wasn't released in Japan, which would've made it even more of a joke like how the Xbox family was (and still is). Not even the QD was able to boost sales since so few were aware of the redesign. Nokia quietly discontinued the system in 2007 in favor of more-conventional candybar-shaped phone models.

In 2008, the N-Gage name was recycled for a mobile gaming service compatible with a number of Nokia S60 smartphonesnote Specifically, S60 Third Edition devices, though not all of them are certified to run the N-Gage client., but not the actual N-Gage or QD. Some of the original platform's exclusives received remakes or sequels. "N-Gage 2.0" proved even shorter-lived than its namesake, shutting down after less than two years.

Games for the N-Gage console: