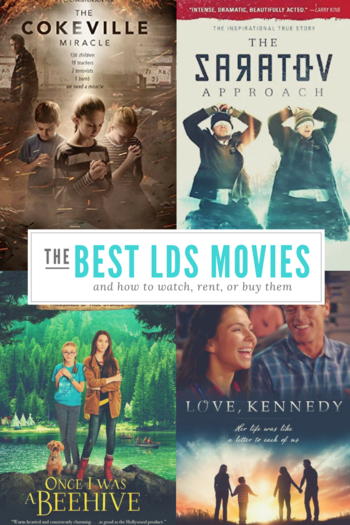 This is a list of films that prominently feature the Mormon culture, either through a history film taken from the Church's past or in modern times with a look at the very distinct Mormon Culture that has emerged.

And of course Mormon characters have existed in films in one way or another, but these films are about those movies that feature Mormons and/or the culture as a primary subject.

As can be expected for a church with such a reputation, Mormons have been featured as early as the silent films. Many of these were biased and sought to promote the rumors running around, such as a man on a train trying to get each of his five wives a drink of water. Or one in England that featured a man in dark clothing and sunglasses creeping upon a woman and trying to get her to read pamphlets.

But one of the most respected early films was made in 1940, Brigham Young (also known as Brigham Young, Frontiersman). A biography of the second Mormon Prophet, it was one of the first films to depict him and the Church from a neutral, non-slanderous perspective. Vincent Price was cast as the first Mormon Prophet, Joseph Smith, and the film went through the early days to Young leading the people to Utah. While it did take the usual liberties with history, Heber J. Grant, the Prophet at the time of the film's release, approved of it, believing it would make friends.

In the 1960s and 1970s, the LDS Church began experimenting with using the media to help teach church history as well as appeal to the youth. Various videos made explicitly for the Church Education System have been routinely updated over the years, and evident with the increasing quality of production. But there have been several films produced that were meant to tell a solitary story and shown to general audiences. These movies for a time were available to be seen only at visitor centers at specific temples around the world, but have since become available on video or DVD as the following films were made.

Movies Made By Mormons

In 2000 a young filmmaker named Richard Dutcher took a dramatic leap forward in regards to how Mormons are depicted by unabashedly releasing a movie dedicated to showing the life of the missionaries people see on the streets. Basing much of it off of his own experiences as a missionary in Mexico, God's Army was a surprise independent film hit. This in turn gave rise to a new slew of Mormon filmmakers who sought to depict other aspects of Mormon culture to the movie-going community.

This production company was made and helped to bring forward a new series of Mormon-based films, most of them comedies poking fun at the cultural quirks of the church. One issue that the following series of films ran into was appealing to members outside of the church as there is so much internal terminology that no one unfamiliar (or even somewhat familiar) with the church would be able to crack.