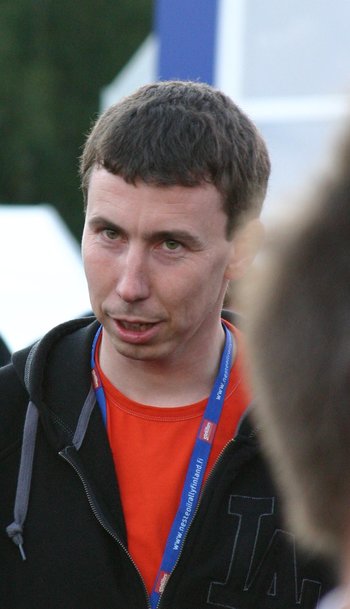 Märtin in 2006
Markko Märtin (born 10 November 1975 in Tartu) is an Estonian rally driver who competed in the World Rally Championship from 2000 to 2005, He, along with Ott Tänak, is largely recognised for bringing the sport of rallying to the Estonian mainstream.

Märtin gained prominence during the 2002 WRC season, culminating in his maiden win in Greece the following year. This was then followed by four more victories all of which during his time at Ford, being the third non-Scandinavian to score a win in Rally Finland, and the first WRC-backed Rally Mexico event which was held in 2004. 2005 was when Märtin and his co-driver jumped ship to Peugeot. This move proved to be devoid of any rally wins, though the team did manage to score four podiums under their new employers.

The final leg of Wales Rally GB however struck a tragic blow to Märtin's career — two kilometres from the start of Stage 15 at Margam Park, Märtin's car sustained a heavy crash into a tree after losing traction in that stage, instantly killing Michael Park which prompted the organisers to cancel the final two stages. Competitor Sebastien Loeb also voluntarily forfeited his win at the rally out of respect for Märtin and Park, presumably as it would be rather selfish and insensitive of him to win under such circumstances.

Out of guilt and respect for his friend and colleague, Märtin left the WRC circuit, managing a local junior rallying team in his home country. He later lashed out at the FIA, expressing disillusionment at its treatment of the WRC and how it went to a Dork Age. Märtin did make a limited comeback shortly after, competing in the 2006 Rally of Portugal and in the 2006 Danish Touring Car Championship with Hans Hartmann's Honda Racing. He and his father now run a haulage and motorsport business, alongside a Subaru dealership.