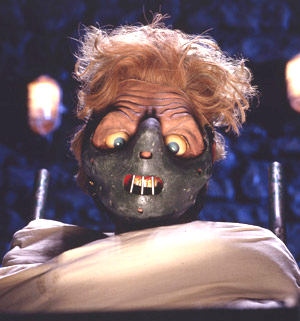 She had a bit of an image problem.
"Normally journalists would point out how very filled with politics all the other British writers of the school of eighty-something were, and that Sandman wasn't. And why is that? And I would hesitantly suggest that I thought that Sandman might have been a bit more political than they thought, and they would say no, it definitely wasn't; where was Margaret Thatcher, after all, and why hadn't I shown her eating babies with her vampire teeth?"
— Neil Gaiman
Advertisement:

British Prime Minister (and the first woman to hold that position) for 11 years, Margaret Thatcher remains the most divisive figure in British political history. Her administration featured controversial economic policies, high unemployment, the Miners' Strike, The Falklands War, a significant disembowelment of the Trade Union movement, the sidelining of Britain's heavy industry sector, and privatisation of public assets. As you can imagine, she's very divisive.

Punk music and the 1980s alternative comedy movement made her a frequent target, so in fiction she is caricatured with a punkish Refuge in Audacity. Many 1970s and early '80s depictions concentrated on her domination of her husband, Denis, who would appear as a nebbishy idiot drinking to deal with her. Over time, Denis was all but forgotten, and Maggie became more of a singular Evil Overlord figure, possessing Wicked Witch-like dark magic or occasionally be analogised to a Video Nasty psychopath. Even admiring portrayals of Thatcher tend to portray her as an unstoppable, terrifying force, an image the real Thatcher exploited.